President Nicolae Timofti, Supreme Commander of the Armed Forces, visited the military units of the Ministry of Defence 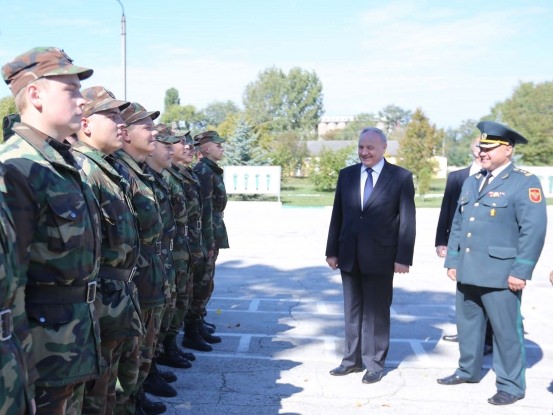 President of the Republic of Moldova Nicolae Timofti, Supreme Commander of the Armed Forces, visited today, 26 September current year, the military units of the Balti garrison of the Ministry of Defence.

Head of State became acquainted with the activity of the Motorized Infantry Brigade No.1 and inspected dislocation of the units and the supplied weaponry.

President held discussions with the leaders of Motorized Infantry Brigade No.1 and conscripts about the conditions of fulfilling military service, current missions and future goals.

Nicolae Timofti expressed his satisfaction with the physical condition of the military as well as with their training; however he noted the need to improve the material conditions in the barracks and exercise fields for a better development of country’s Armed Forces.

President Timofti signed the book of honour of the Motorized Infantry Brigade No.1 and received an engraved souvenir of the unit from the brigade commander.

During his visit to Balti garrison, the head of state visited the Military Hospital and the Territorial Military Centre where the reservists of the National Army are periodically mobilized to check the status of their preparation for defence and to update their military records.

The President was accompanied on his visit to the garrison Balti by the Minister of Defence Vitalie Marinuta and the Mayor of Balti municipality Vasile Panciuc.