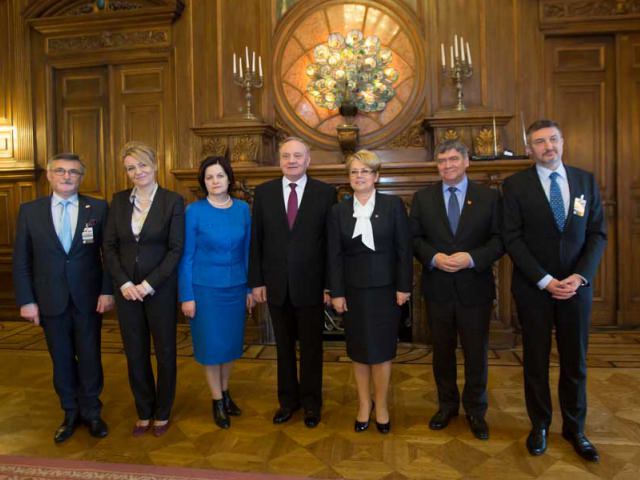 President Nicolae Timofti today met local authorities and visited more institutions and companies in the Lodz voivodeship, on his two-day visit to Poland, the presidency's press service has reported.

The Moldovan delegation, led by the president, had talks with councillors of the Lodz region, which recorded a significant economic growth as a result of EU funds absorption. The sides discussed possibilities of taking over Polish best practices in self-government.

During the meetings with Voivod of Lodz Mrs. Jolanta Chełmińska, Marshal of Lodz Witold Stepien and Lodz Mayor Hanna Zdanowska, the officials agreed on a visit to the Lodz region by Moldovan representatives of local authorities and entrepreneurs, to familiarise with elements of common interest. Also, the Polish side expressed willingness to host meetings and various activities in the fields of culture, arts and education.

President Nicolae Timofti thanked the Polish side for the support it thus granted to Moldova and stressed that such initiatives were important steps to be taken for Moldova’s European integration.

"The contacts between Moldovan and Polish citizens will substantially facilitate the full understanding of the processes which we must go through to get closer to the European Union, and one of the things we need to accomplish is the decentralisation of power in Moldova", said the president.

The president reiterated the Moldovan authorities' wish to attract investments from the European Union and assured that Moldovans understood the importance of creating a friendly climate for investments, including by protecting the latter through laws and best practices.

President Nicolae Timofti visited a museum of woven fabrics and, accompanied by First Lady Margareta Timofti, a scientific mother and child hospital, where he agreed on experience exchanges between Polish and Moldovan doctors.

President Timofti today concludes his two-day visit to Poland, undertaken at an invitation by his Polish counterpart Bronislaw Komorowski.