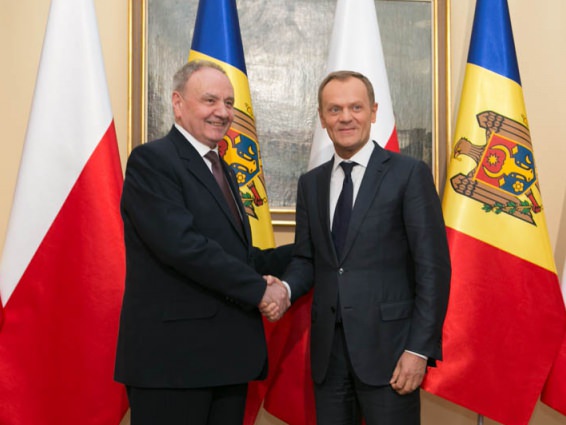 Timofti thanked the Warsaw authorities for the solidarity expressed in the context of the current regional situation and the confidence provided to Moldova in the European integration process. Nicolae Timofti highlighted the financial and logistic assistance provided by Poland for Moldova’s alignment to the EU standards.

Donald Tusk said that Moldova could rely on its EU partners’ support.

The Polish official welcomed the achievements recorded by Moldova in the reforms. He added the signing of the Association Agreement with the EU in the near future would represent an irreversible step to a democratic and prosperous society. “After the signing of this document, the talks on Moldova’s development path will certainly subside”, he said.

Tusk highlighted the importance of co-opting representatives of national minorities in the society’s demarche on Moldova’s EU integration.

Donald Tusk welcomed the presence of the representatives of Gagauzia and Balti municipality in the Moldovan official delegation. “This represents a response to those who speak about the restriction of rights of national minorities in Moldova,” he said.

On 14 April afternoon, Timofti had meetings with Marshal of the Sejm Ewa Kopacz and Senate Speaker Bogdan Borusewicz.