President Nicolae Timofti had a meeting with the Romanian President, Traian Basescu 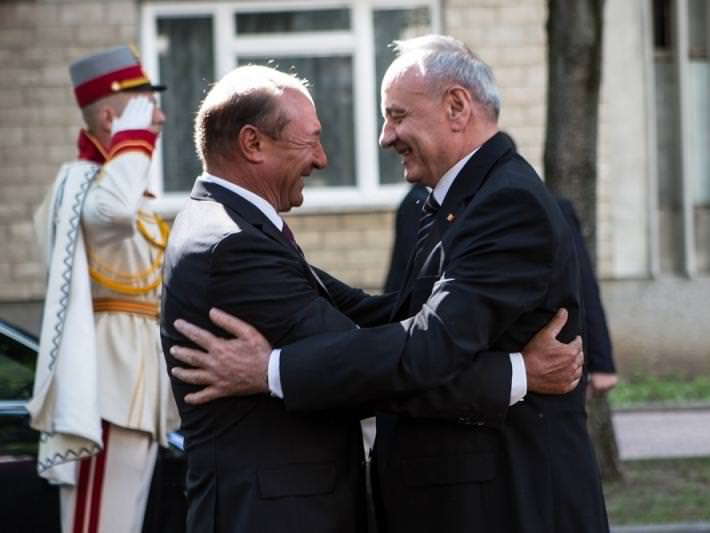 President of the Republic of Moldova, Nicolae Timofti, had today, 17 July current year, at the State Residence, a meeting with the Romanian President, Traian Basescu.

The two heads of state had a face-to-face meeting, followed by official talks with the participation of the members of the two delegations.

At his turn, president Traian Basescu stressed the importance of the Vilnius Eastern Partnership Summit for Moldova’s future. “By initialling the Association Agreement and the Free Trade Agreement with the EU, the Republic of Moldova will get a clear prospect of accession to the European Union. Romania will always be an unreserved advocate of the Republic of Moldova in its European integration, while observing, at the same time, the option of the country’s military neutrality”, Traian Basescu said.

The two officials debated a string of common projects, meant to ensure the energy security of Moldova. “Romania is inter-connected to the European energy network and may provide to Moldova an alternative for the import of gas and electric energy,” the Romanian head of state said.

Nicolae Timofti and Traian Basescu agreed on a friendly and immediate settlement of the issue related to rebroadcasting the TVR1 Romanian public television on the territory of the Republic of Moldova.

At a news conference given by the two heads of state, Traian Basescu acknowledged that the visits to Chisinau call forth emotions for him each time. The Romanian president promised to pay his first visit to Chisinau after his mandate is over, where he will confess about the relation between the two states. “I never dare to say that we have strategic, economic or other kind of partnership. We have a partnership of blood,” Traian Basescu said.

The Romanian head of state declared that, starting from the next year, the Bucharest government will provide 6,000 education scholarships to Moldovan young people. “In the near future, the issuance of permits with biometric data will be resumed to Moldova’s citizens for the small border traffic,” Traian Basescu stressed.

Asked by journalists whether provocations are possible on behalf of Russia ahead of the Vilnius Summit, President Nicolae Timofti said Moldova will not let itself be involved in such actions. “The democratically elected Moldovan authorities have the people’s mandate to carry out the programme of adjusting to the European Union values. Although, just as in each democratic state, there are forces contesting this option, I am sure that Moldova, with perseverance, will manage to achieve the set objective,” Nicolae Timofti said. President Traian Basescu specified that he rules out such a scenario. “I don’t think that there will be provocations on behalf of Moscow. This is a capital of a country which respects itself a lot to resort to provocations backed by the state,” the Romanian president added.