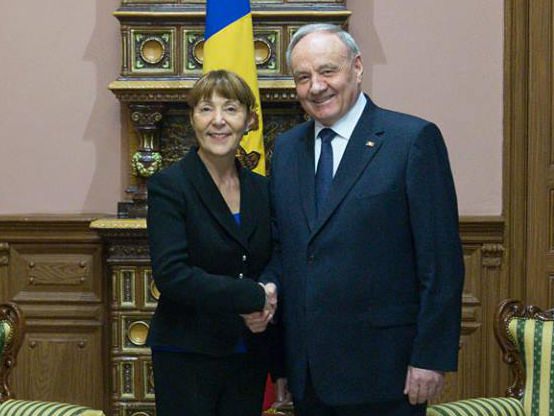 The president praised the holding of 18th meeting of the Parliamentary Cooperation Committee in Chisinau. He also described it as efficient and extremely useful for Moldova’s relations with the European Union.

President Timofti reiterated Moldova's wish to speed up the signing of the Association Agreement with the European Union and its willingness to fulfil the country’s commitments towards the European partners.

MEP Monica Macovei agreed that, in the context of the current political crisis in the region, the European Union should give Moldova a response in line with the country’s aspirations, in the sense of outrunning the deadline for signing the Association Agreement for the nearest period possible.

Nicolae Timofti and Monica Macovei also discussed the situation in the region, the conditions in the settlements from southern and eastern Moldova and the judicial system reformation.

The two officials referred, in particular, to the situation of the Latin-script schools from the Transnistrian region and the need to involve European actors in protecting teachers and students at these schools.

Head of the EU Delegation to Moldova Pirkka Tapiola also attended the meeting of the Moldovan president with the European Parliament delegation to the EU – Moldova Parliamentary Cooperation Committee.