Nicolae Timofti: „Poland is a strong supporter and a great friend of ours” 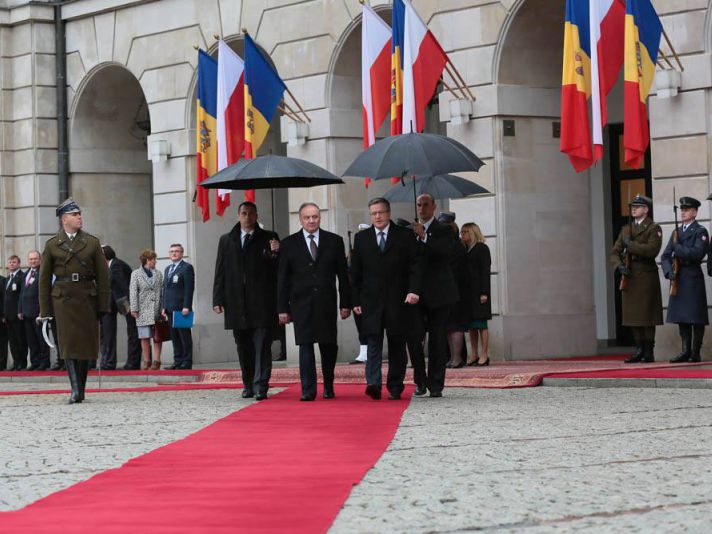 The presidents had a face-to-face meeting, after which they took part in official talks with the participation of the two delegations’ members.  (video: https://www.youtube.com/watch?v=S_2tOfyNoOI&feature=youtu.be)

"My country is currently at a meaningful phase for its European agenda. The weeks and months ahead will bring long-awaited events by the Moldovan citizens: the visa liberalisation and signing the Association Agreement with the European Union.

These are achievements to which you also contributed, through political support, solidarity, sharing the Polish experience gained over 25 years of successful transformation and modernisation of the country", said Nicolae Timofti.

The president stressed that, despite the difficult regional circumstances, Moldova would consistently follow the European agenda, which was promising for the Moldovan citizens’ welfare and security.

"I remain confident that, through joint efforts, we will strengthen Moldova's irreversible European course, in order to be together within the united, stable and prosperous great European family in the long run. Poland is a strong supporter and a great friend of ours. We are further counting on this support." said President Nicolae Timofti.

For his part, President Bronislaw Komorowski said that Poland would continue to firmly support Moldova's European agenda and provide assistance and expertise, so that Moldova achieved its development and modernisation goals. President Komorowski referred to Poland’s decentralisation experience, which would also be useful to develop the principle of self-governance in different regions of Moldova. At the same time, the Polish president voiced the hope that Moldova’s foreign and domestic successes would strengthen the citizens’ confidence in the correctness of the country's European agenda.

Nicolae Timofti and Bronislaw Komorowski also discussed the political situation in the region and expressed concern about the latest events in Ukraine. Komorowski said the events in eastern Ukraine were a threat to the security and economy of Europe.

Nicolae Timofti is accompanied by First Lady Margarita Timofti on his visit to Poland.