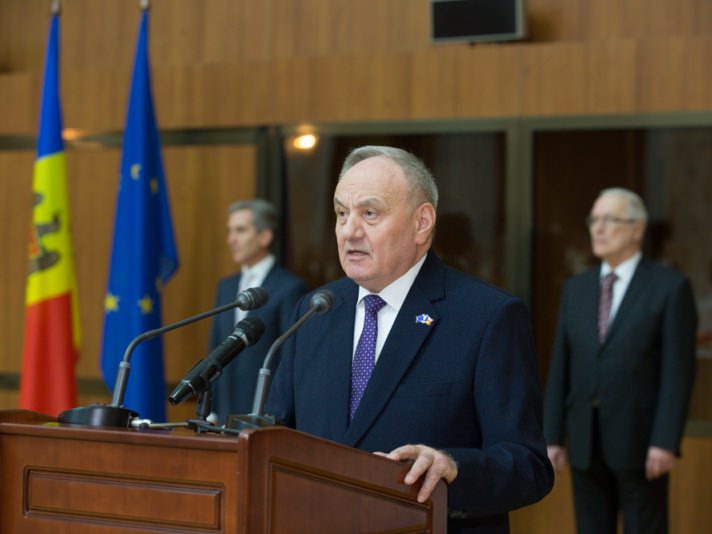 The year that passed since our last meeting was a benchmark one in international affirmation of the Republic of Moldova and for strengthening its development course within the European family.

In a difficult regional security context, with challenges to the security and stability of the Republic Moldova, we were able to substantially advance our relations with the European Union.

We have made a crucial step forward in our country’s integration into the European Union by achieving a visa-free regime with the EU Member States, with signing, ratification and implementation of the Association Agreement, including a free trade area with the European Union.

I should mention that this success is, first of all, due to the consistent support we have received from the behalf of the EU Member States, the United States of America, and other partners, both at the political level as well as in our efforts to modernize our country.

We do count on our European partners’ political support at the Eastern Partnership Summit in Riga to reconfirm Moldova’s European perspective.

Implementation of the Association Agreement’s provisions remains our major national objective for the years 2015-2016. We will work with perseverance to achieve all the stage’s tasks.

The support of the European Union Member States and that of our development partners in the view of achieving a broad spectrum of sectorial objectives will contribute to the Republic of Moldova’s integration into the EU internal market.

The bilateral relations with neighbouring countries Romania and Ukraine were consolidated in 2014. They are to remain a further priority for our foreign policy.

The Moldovan-Romanian relations have advanced substantially by implementing the priorities on the bilateral agenda and conducting multiple economic and social projects.

The inauguration of Iasi-Ungheni pipeline has set the basis for energetic interconnection with Europe.

Romania is one of our main trade and economic partners, and a valuable promoter of Moldova’s European cause.

Ukraine, being an important factor for cooperation and regional security, we do further rely on its active role in the Transnistrian conflict settlement. However, with a deep sorrow I would like to express our concern about the dramatic evolution of events in the South-Eastern regions of Ukraine.

During this period of hardships for the Ukrainian people, I would like to reiterate our message of solidarity and support to the efforts undertaken with participation of international partners, aimed at finding a peaceful political solution to the crisis, without external interference and respecting the principles of Ukraine’s sovereignty and territorial integrity.

The bilateral relations between our country and the United States of America have undergone an upward development, being marked by boosting high-level political dialogue, both at governmental level and within legislative forums.

Launching in 2014 the Strategic Dialogue and deepening dialogue with the US Congress has triggered the commercial-economic dimension of cooperation.

The bilateral relations between the United States of America and the Republic of Moldova have advanced in 2014 towards a deep level of mutual commitment and interest. We will maintain the same upward trend of our relations with the American partners.

I would like to take this opportunity to greet the new Ambassador of the United States, His Excellency, Mr. James Pettit, who has presented today his credentials.

Further, it is to be mentioned the fruitful political dialogue and continuous development of economic relations with Belarus, Turkey, Israel, China, Japan and South Korea.

We intend to fully capitalize the cooperation potential with these countries and also with other developing regional and global actors.

In particular, I would like to mention, the intention of the Republic of Moldova and Japan to open, on the basis of reciprocity, embassies in Tokyo and Chisinau during the current and next year.

The Russian Federation remains an important political, trade and economic partner to our country.

We will continue our efforts at the political level and through the line ministries to overcome the artificially created restrictions in sectors of our traditional cooperation.

The diplomatic service has made consistent efforts during the last year to strengthen the legal framework on bilateral relations, resulting in the visa-free regime with a number of countries such as the Republic of Turkey, the State of Israel, Montenegro and the Republic of Albania.

Considerable amount of work has been done to strengthen interaction and support capacities for the Moldovan Diaspora, to extend the number of networks of Career Consulates and Honorary Consuls of the Republic of Moldova, to assist our citizens in crisis situations.

We will further pay special attention to multidimensional cooperation within relevant international organizations such as the UN, OSCE and Council of Europe.

In a more complex and inter-connected international environment, we felt that it was important to deepen political dialogue and practical cooperation with NATO, focusing on our country’s security and defence sector reform and modernization.

Thus, the Republic of Moldova sent a contingent of 41 soldiers to join KFOR operation in Kosovo in March 2014.

Also, the Republic of Moldova has joined the Interoperability Platform and the Defence Capacity Building Initiative at the NATO Summit in Wales.

The Transnistrian conflict settlement remains a priority objective, our efforts being focused on creating favourable conditions for finding a solution based on respect for sovereignty and territorial integrity of the Republic of Moldova.

A prerequisite for this process will be to complete the withdrawal of troops and ammunition stocks of the Russian Federation, which has no consent of the Republic of Moldova, as well as transformation of the peacekeeping operation in the Security Zone into a civilian mission with appropriate international mandate.

Only this way we can build together with our compatriots, living in the Transnistrian region, a democratic European country which will ensure the welfare of all Moldovan citizens as well as their fundamental rights and freedoms.

And finally, I would like to express my belief that in the nearest future the Parliament will give a vote of confidence to a new Government that will continue the policies of Moldova’s Europeanization which is, according to my deep conviction, the only way towards our country’s prosperity.

I thank you for attention.