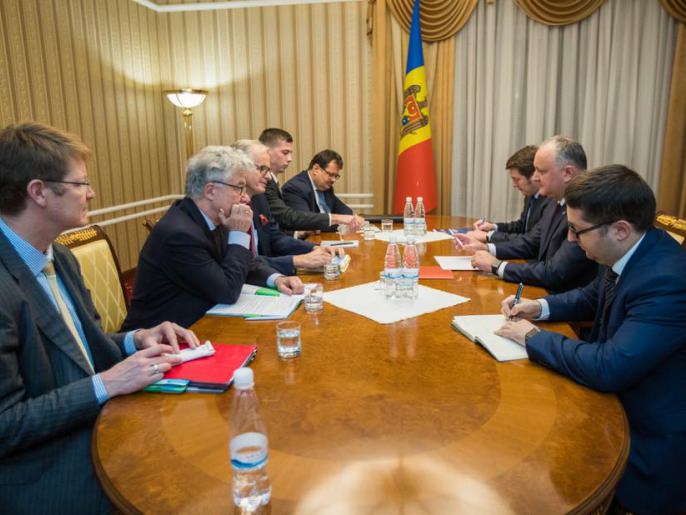 The President of the Republic of Moldova Igor Dodon received delegation from the European Commission headed by the Director General of the Neighborhood Policy and Extension Christian Danielsson of Sweden and the Managing Director of the Europe and Central Asia Division at the European External Relations Directorate Thomas Mayr-Harting of Austria. The meeting was attended by the head of the permanent delegation of the European Union in Moldova Peter Michalko.

The head of state had a thorough discussion on the whole range of relations between the Republic of Moldova and European Union, having thanked the European partners for the comprehensive support of our country.

Igor Dodon spoke about the parliamentary elections scheduled for February 24. “I stressed the importance of organizing them transparently and providing equal conditions for all electoral competitors”, the Moldovan President RM said. He told about the current state and prospects of the Transnistrian conflict settlement, having remarked the important role of the European Union in the negotiations.

The head of state explained to the European partners the essence of the Presidential strategy in terms of a balanced foreign policy and mutually beneficial partnership with the countries of West and East basing on the constitutional principle of permanent neutrality and without engaging in others’ geopolitical games. “I especially remarked that this position has been brought to the attention of the key external partners of Moldova and had found understanding and support there,” the Head of State said.