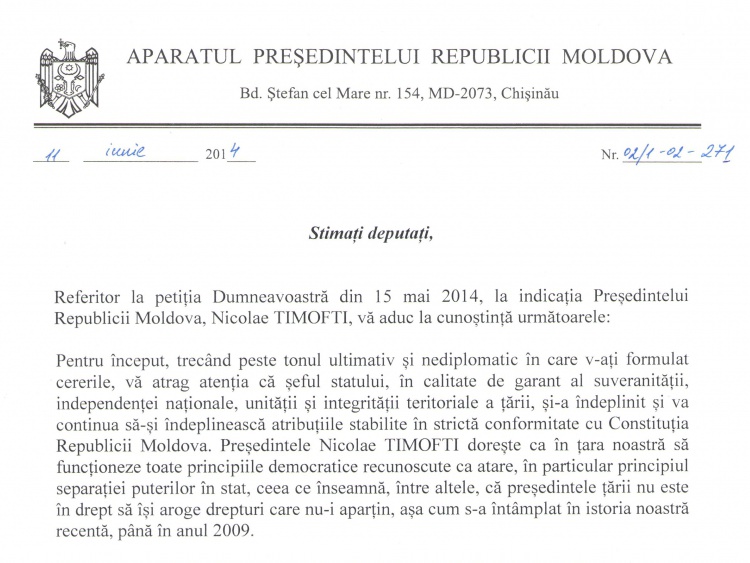 President Apparatus Secretary General Ion Paduraru, at an instruction by President Nicolae Timofti, today conveyed an answer to a petition submitted by the faction of the Party of Communists (PCRM) of the Moldovan parliament to the head of state on 15 May 2014.

As for you petition from 15 May 2014, at an instruction by President Nicolae Timofti, I bring to your knowledge the following:

For the beginning, overlooking the ultimatum and non-diplomatic tone in which you have formulated your requests, I draw your attention that the head of state, in his capacity of guarantor of the sovereignty, national independence, unity and territorial integrity of the country, has fulfilled and will continue fulfilling his powers in strict accordance with Moldova’s Constitution. President Nicolae Timofti wants all the democratic principles, recognised as such, function in our country, in particular, the principle of state powers’ separation, which means, inter alia, that the country’s president has no right to assume rights which does not belong to him, as it happened in our recent history, till 2009.

Therefore, the president cannot comply with Your request to dismiss the government, given that, in order to issue a presidential decree to this effect, the condition stipulated in the article 106, paragraph (1) of the Constitution must be fulfilled, which refers to the parliament’s right to give a no-confidence vote to the government, with the votes of the majority of the lawmakers. After several failed attempts by PCRM to dismiss the government via motions of censure, it is obvious that the present cabinet of ministers, led by Prime Minister Iurie Leanca, has every needed support on behalf of the parliamentary majority to carry out its activity in continuation.

As for a request that the Moldovan government makes use of one of his constitutional powers and initiate a referendum on Moldova signing the Association Agreement with the European Union, including the Deep and Comprehensive Free Trade Area (DCFTA), I inform you that, while taking into account the international practice, such accords do not need to be approved by a plebiscite. The concerned agreement is one that establishes the legal framework of a state’s (Republic of Moldova) cooperation with a supranational international organisation (EU) and not the accession to the latter. For instance, the Free Trade Agreement within the Commonwealth of Independent States (CIS) was signed and ratified by Moldova without its beforehand approval via a referendum. Neither Moldova’s capacity of CIS member was decided by a referendum.

At the same time, the Party of Communists has had and continues to have at its disposal legal instruments in order to initiate such forms of consultation of the people’s will, it can make use of in conditions of the law.

Beyond the political strategies, natural to a certain point in an electoral year, it is important that PCRM returns to the idea of Moldova’s European integration, which it was promoting at least in declarations on the period when this formation was in power.

The recent voices, at the level of the PCRM leadership, which have pro-European statements, are signals showing political maturity and political realism, and are encouraging for the political climate of Moldova and for the success of our citizens’ European aspirations.

The president hopes very much that the parliamentary elections, scheduled to be held in next autumn, confirm once again and for good the people’s will, you refer to in your letter, on our country’s European option, towards the security and well-being of all Moldova’s citizens.”.