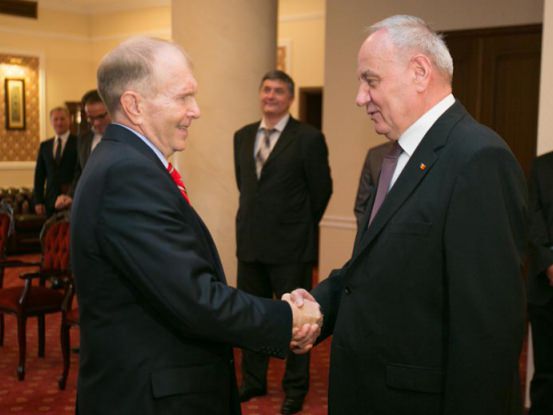 The award was awarded under presidential decree on 3 July 2014, “as a token of deep gratitude for his special contribution to the development and deepening of the Moldovan-American friendship and cooperation relations."

At the ceremony, the president thanked Ambassador William Henry Moser for his personal commitment in promoting good bilateral relations, as well as for the USA’s constant and consistent support for Moldova.

"The United States of America has hugely contributed to consolidating the democratic institutions and modernising the infrastructure in Moldova. Moldovan citizens understand that the American people represent a trustworthy partner,” said the president.

Nicolae Timofti stressed that the development of the Moldovan-U.S. strategic dialogue was a priority of Moldova’s foreign policy.

William Henry Moser expressed satisfaction with the progress made by the Moldovan authorities in modernising the society. "The United States will continue to support the transfer of experience to support nations who share the values of democracy and freedom," said the head of the American diplomatic mission.

William Henry Moser pointed out that Washington closely monitored the developments in this area of Europe.

"USA wants Moldova to have the right to choose its future without constraints. A democratic government, elected at free polls, free market economy and press represent the guarantee of peace, progress and stability. We will sincerely be happy with the progress of our friends from Moldova,” said William Henry Moser.