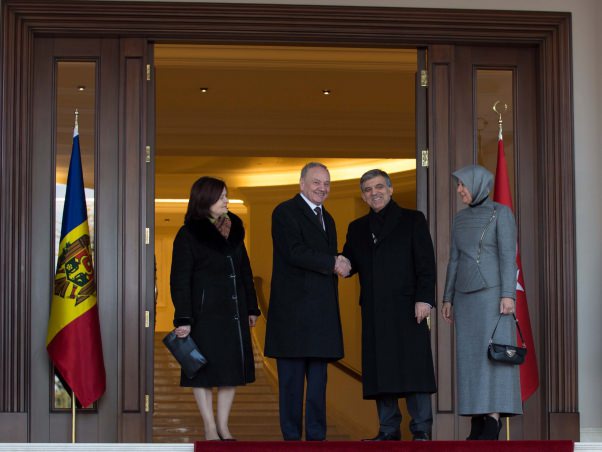 The two presidents had a face-to-face meeting and afterwards they took part in official talks with the participation of the two delegations.

Timofti opted for enlarging the cooperation relations between Moldova and Turkey. The two presidents discussed the need to work out and sign a Joint Declaration on setting a strategic partnership between the two countries.

Abdullah Gul said that the bilateral trade exchanges amounting to 500 million dollars could double after the signing of the Free Trade Agreement.

Timofti expressed his support for elaborating joint projects in agriculture and energy sectors, as well as signing an agreement on social protection of citizens.

The two officials approached the European integration process, both states are involved in.

“Moldova has recently initialled the Association Agreement with the EU, a historical document for my country, from the political and economic viewpoint, and the European Parliament recommended that the member states liberalise the visa regime for Moldovans”, Timofti said.

Abdullah Gul welcomed Moldova’s achievements in the process of modernisation in view of aligning with the EU standards.

“Turkey has the status of candidate, and has recently signed with the European Union the Agreement on readmission, and started the talks on the liberalisation of the European visas for the Turkish citizens,” Abdullah Gul said.

Both presidents said that Gagauzia represented a strong link fortifying the friendship relation between Turkey and Moldova. “We back the Gagauzians’ efforts of integration into the Moldovan society by keeping their cultural identity and improving the social and economic conditions in the region”, Timofti noted.

The Moldovan president expressed regret that certain leaders from Comrat did not support the official policy of rapprochement with the EU and wanted to initiate a referendum on accession to the Russia-Belarus-Kazakhstan Customs Union.

In this context, Gul said that the foreign policy of a country should be promoted exclusively by the state central institutions. “All Moldovans, including Gagauzians, will benefit from the effects of the EU integration,” he said.

The two officials welcomed the signing of the agreement on mutual abolition of visas, a document ratified by the Moldovan parliament and on which the Turkish MPs are to give their opinion.

“The Turkish coast is the most popular tourist destination for the Moldovans, and the agreement will facilitate the interpersonal ties and will boost the cooperation of the economic agents”, Timofti said.

Also, Nicolae Timofti met the head of the Turkish Parliament Speaker Cemil Çiçek, and discussed issues related to the inter-parliamentary bilateral cooperation, as well as within the international organisations.