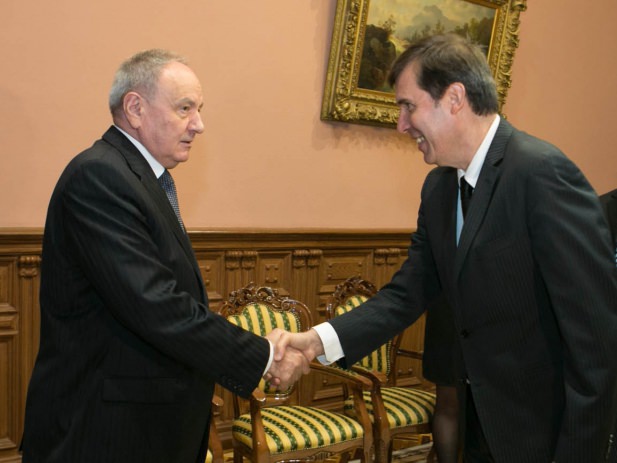 The Head of State expressed hope that the visit to Chisinau by the Bulgarian International Master, member of World Chess Federation Council, would help popularise the sport among children and young people in Moldova. In this context, President Timofti pointed out projects launched by the National Chess Academy in concert with the Government of the Republic of Moldova on the creation of a Chess Education System that will allow studying chess in schools.

“Chess unites people and develops their intelligence and imagination. I will support all efforts of schools to popularise this game of mind. I am proud when our chess players achieve outstanding results in international tournaments”, said the President.

President of the European Chess Union Silvio Danailov praised the efforts of the competent associations and education authorities in Moldova to include chess in the list of optional sports in the Moldovan schools. “I saw a lot of determination and enthusiasm in this regard. These initiatives fit the European campaign on popularization of chess”, Silvio Danailov said.

Silvio Danailov is one of the promoters of the “Chess in School” European programme, approved by the European Parliament in Strasbourg on 13 March 2012. Experts qualified this decision as a historical success for the game of chess.