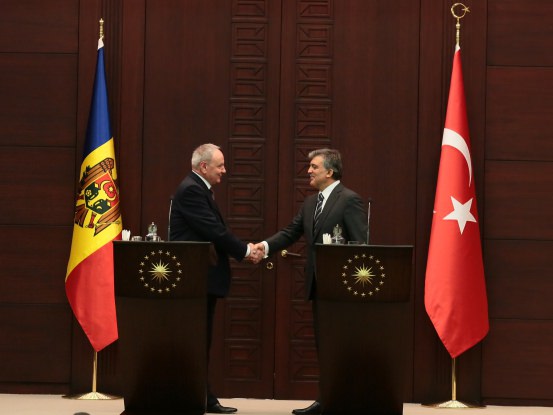 President Nicolae Timofti, on a visit to Turkey, today met his Turkish counterpart Abdullah Gul at the presidential palace in Ankara.

After the face-to-face meeting and official talks with the participation of the delegations of the two states, Nicolae Timofti made the following press statement:

I am honoured to be in Turkey and I thank Mr. President Abdullah Gul for the invitation to visit this state, which by its history, traditions and active politics, has become a powerful regional actor and a pole of stability at the confluence of two continents.

I also thank you for your hospitality and attention the Moldovan delegation has been treated with.

The today meeting with Mr. President Abdullah Gul represents a proof of the common will to consolidate and expand the cooperation relations between the two states.

This is a continuation of the very good political dialogue between the two countries. Over the past two years, memorable and really efficient Moldovan-Turkish high-level meetings have been held.

Along with Mr. President Gul, we agreed to deepen the Moldova-Turkish ties. We discussed the need to work out and sign, as soon as possible, a joint declaration on the setting of a strategic partnership between our states. Such a document would boost up the constructive dialogue and cooperation at different levels.

One of these dimensions is the European integration. Moldova has recently initialled the Association Agreement with the European Union - a historic document for Moldova from the political and economic points of view. At the same time, the European Parliament recommended its member states to liberalise the visa regime for the Moldovan citizens.

For its part, Turkey is a candidate state and has recently signed the Readmission Agreement with the European Union and started talks on the liberalisation of the visa regime for the Turkish citizens.

Therefore, we have common goals in the European integration process and we will mutually back in this process.

Returning to the bilateral relations, I would like to highlight that we see the economic cooperation as a key area where we may get important achievements.

We encourage the collaboration between the business communities and engage to improve the business environment and the legal framework.

We welcome the two states’ intention to sign the Moldova-Turkey Free Trade Agreement in the near future. The Moldovan-Turkish intergovernmental commission is to play a role of coordination to create friendly conditions for business.

We back the working out of joint projects in the agriculture and energy sectors. There is an efficient cooperation as regards the public health and consultations are held on an agreement of social protection of citizens.

We will also support the initiatives on education. As for the culture, the Moldovan Culture Ministry and Turkish Culture and Tourism Ministry today signed an action plan.

We hope that tourism will develop with a new impetus after the mutual abolition of visas. The Moldovan parliament has ratified the concerned agreement and now the Grand National Assembly of Turkey to give its opinion on this document.

Together with President Abdullah Gul, we discussed the importance of the Gagauz community from Moldova in advancing of the friendship and cooperation relations with Turkey. We back the efforts of the Gagauz people to integrate into the Moldovan society, by preserving their cultural identity and improving the social and economic conditions in the region.

We also reviewed aspects of the inter-parliamentary bilateral collaboration, as well as within the international organisations.

I thank once again Mr. President Abdullah Gul for his openness and kindness and I reconfirm the confidence in the possibility to consolidate our relations for the benefit of the Moldovan and Turkish nations.