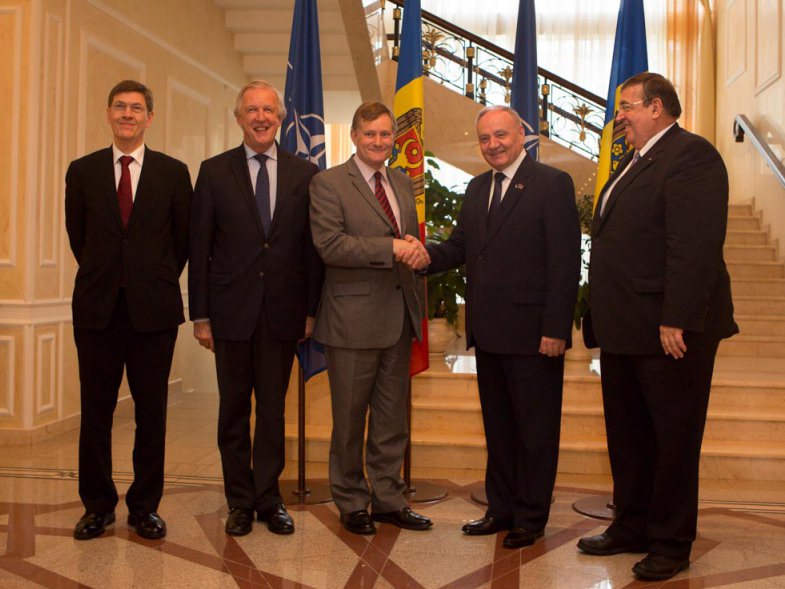 The two officials exchanged views about the ways to consolidate the cooperation ties between Moldova and NATO, as well as the regional situation.

Timofti welcomed the presence of a NATO PA president in Moldova for the first time ever.

Timofti voiced concern about the evolutions in Ukraine, which jeopardised the regional security. Timfoti reiterated Moldova’s position towards the situation in Ukraine and underscored the importance to observe its sovereignty and territorial integrity.

Timofti declared as unacceptable the exercise of military, political or economic pressure in the relations between states and spoke out for strict observance of the principles of the international law.

Timofti showed that the presence of the 14th Russian army on Moldova’s territory, despite the Moldovan constitutional authorities’ will, was a flagrant violation of the status of neutrality, stipulated by the Moldovan Constitution. „Russia does not respect the commitments to withdraw the military troops from Moldova’s territory, taken at the OSCE Summit in Istanbul, in 1999,” Timofti said.

Timofti said he counted on NATO’s support, in order to foster the capacity to defend and ensure security of Moldova. „The opening of a NATO permanent representation in Chisinau would significantly contribute to carry out the bilateral cooperation programmes,” Timofti said.

Hugh Bayley highlighted the importance to ensure a peaceful and stable climate in this region of Europe. Bayley said that there was no incompatibility between the status of neutrality of Moldova and development of a partnership with NATO.

„NATO observes Moldova’s neutrality status. The Moldovan authorities are to set the cooperation level with the Alliance. As for us, we want to contribute to consolidate the national security of Moldova,” Bayley said.

Bayley described as exemplary the performance of the National Army within NATO peacekeeping mission in Kosovo, carried out under United Nations aegis.

Hugh Bayley welcomed the signing of the Association Agreement between Moldova and the European Union and was confident that the implementation of the provisions of this treaty would offer only benefits to the Moldovan citizens.

The NATO delegation, led by Hugh Bayley (Great Britain), is made up of Vice Presidents of the NATO Parliamentary Assembly Daniel Bacquelaine (Belgium) and Karl Lamers (Germany), Secretary General David Hobbs (Great Britain), Director of the Science and Technology Committee Henrik Bliddal (Danemarca). The delegation is on a tour, within which visits Moldova, Ukraine and Georgia.

Moldova is an associate member to the NATO Parliamentary Assembly since November 1994.