Moldovan President Igor Dodon had a meeting with the Sovereign Pontiff, His Holiness Pope Francis 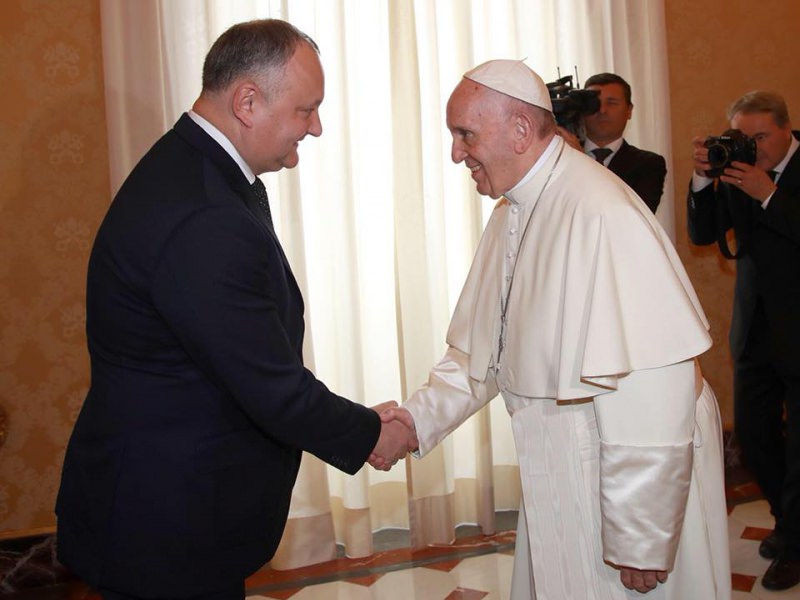 During the dialogue, the head of state mentioned the importance that Moldova attaches to the collaboration with the Holy See. Our country declares its adherence to the development of interreligious dialogue, strengthening partnership in the social, educational, medical and other spheres.

"We have noted the special role of the Pope in peacemaking, his contribution to the establishment of equity and solidarity in the world. I expressed to the Sovereign Pontiff words of gratitude for solving contemporary problems of major importance, for his involvement in establishing dialogue between civilizations and religions, "Igor Dodon said.

The head of state emphasized that the Supreme State Law, the Constitution of the Republic of Moldova, guarantees freedom of conscience and religion. At the same time, people of Moldova are promoters of Christian values. Christianity, being the religion of most of our people, has a decisive influence on our identity and the moral values of our people.

The president of the country has positively appreciated the cooperation between the Orthodox and the Catholic Churches, being in a continuous and efficient development in the last years.

"I remembered about the meeting in Havana between the Bishop of Rome and Patriarch of Moscow and All Russia Kirill. I expressed the hope that the resumption of direct dialogue between the leaders of the two Churches will contribute to the consolidation of the country and to the protection of the fundamental Christian values and, in particular, to the protection of Christians in the regions where persecution and discrimination are registered, „emphasized the head of state.

At the same time, Igor Dodon pointed out the efficient activity of the Catholic Church in Moldova. Together with other religious organizations, the Roman Catholic Church carries out a fruitful activity in the social, humanitarian and educational sphere, in identifying victims of trafficking in human beings.

At the end of the meeting, Igor Dodon wished the Sovereign Pontiff a lot of health and continued work in the name of peace, humanism and human development.