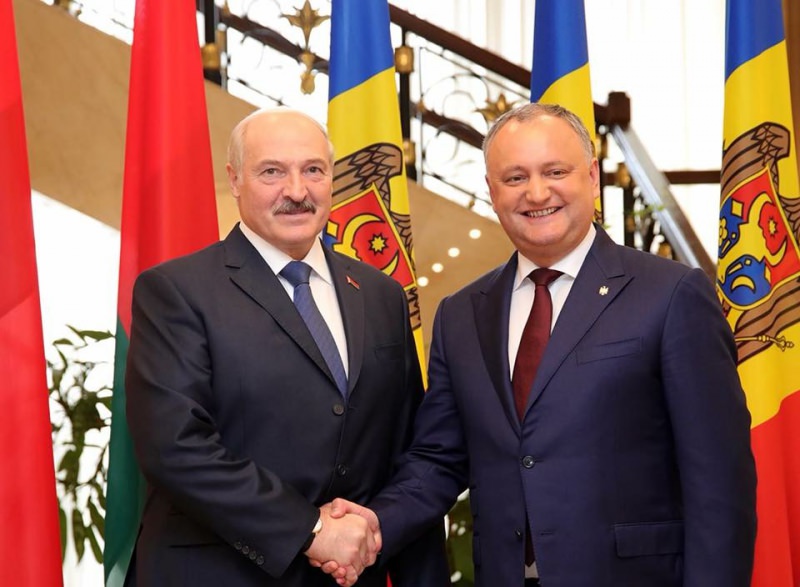 During the dialogue, Igor Dodon reported on the constant interest shown by Moldovan citizens towards the Belarusian economic "miracle", but also the enthusiasm with which they talk about the street cleanliness of the Belarussian cities, about the exemplary order in public life, about the secure social guarantees for the working people.

"Besides, we know the hard position of the Republic of Belarus in defending national interests. Being a strategic partner with the Russian Federation, it manages to maintain, at the same time, rather "balanced" cooperation with Western countries, first of all, with those in the European Union.

We are pleased that Moldova and Belarus are also actively involved in the international arena, especially within the UN and CIS. I mentioned that, thanks to the extensive support from Belarus, the Republic of Moldova has applied for the status of observer status within the Eurasian Economic Union, "Igor Dodon said.

During the discussion, the parties found the friendly and progressive nature of bilateral relations, expressing the conviction that the potential of collaboration is not fully used. In this context, the President of the country has pleaded for the organization of a new meeting of the Intergovernmental Commission for Commercial and Economic Cooperation this year.

During the meeting, Igor Dodon noted the dynamic growth of trade between our countries. "In 2017, it amounted to about $ 225 million, about 10 percent ($ 20 million) higher than in 2016. Belarus is ranked among the ten partner countries of the Republic of Moldova, holding the first import of Moldovan wines. We have signed more than 90 commercial and economic agreements and another 11 are in the process of drafting. More than 90 Belarusian enterprises operate in Moldova, "the head of state said.

The parties also discussed several large and mutually beneficial projects, in particular on the creation of a joint venture for the storage and marketing of Belarusian petroleum products, as well as businesses for bottling sparkling wine and Moldovan cognac. The President of the Republic of Moldova stressed that there is the possibility to organize activities with the involvement of the free economic zones and the Giurgiulesti terminal in order to promote our products on the markets of third countries, etc.

In the same context, Igor Dodon specified that the creation of the Free Trade Area between the Republic of Moldova and the European Union opens new opportunities for the deepening of the trade and economic cooperation between Moldova and Belarus, especially on the industrial segment, with the participation of the Belarusian investors and the export towards EU, exempt from customs duties.

"Special attention was paid to transport problems. The quality of Belarusian roads is well known in the world, so we have mentioned the interest of Moldova in the participation of Belarusian companies in tenders for the reconstruction, repair and rehabilitation of the streets of the Republic of Moldova ", stressed the President of the country.

In addition, the Moldovan side reiterated its interest in the launch of direct flights between Chisinau and Minsk, as well as the purchase of Belarusian rolling stock by the Railways of Moldova.

At the same time, the head of state mentioned that we are interested in opening, on our territory, the assembling sections for the production of buses and trolleybuses. Moldova is in favor of further deepening cooperation in the field of transport and signing as soon as possible a liberalization agreement for the carriage of goods by road.

During the discussion, the President of the Republic of Moldova welcomed the strengthening of the relations in the field of culture and education, finding that the extension of the inter-human contacts is a guarantor of the consolidated relations between the two states.

Finally, Igor Dodon personally thanked Mr. Aleksandr Lukashenko for his visit to the Republic of Moldova and for sending free of charge a lot of agricultural equipment that our farmers need.