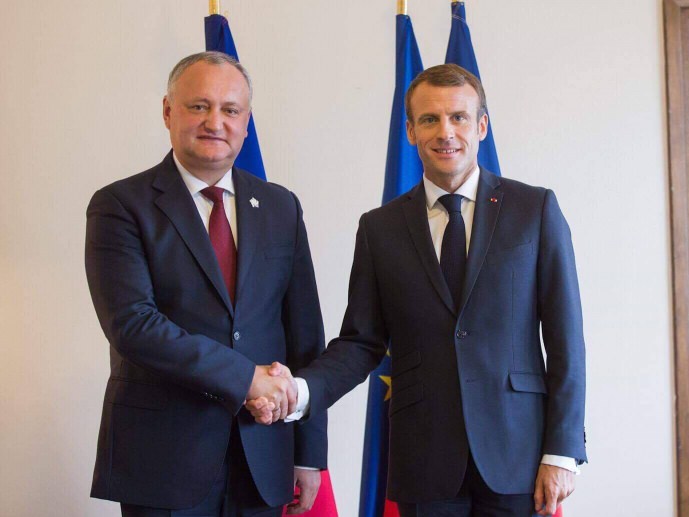 On the last day of the Francophonie summit, which is holding its work in Yerevan, the President of the Republic of Moldova, Igor Dodon, had a meeting with the President of France, Emmanuel Macron. The parties addressed a wide range of issues regarding bilateral relations.

In particular, the head of our state remarked that France, being one of the "locomotives" of the European Union, remained one of the strategic partners of the Republic of Moldova in Europe.

At the same time, Igor Dodon stressed that in the 26 years since the establishment of diplomatic relations, the dialogue between our countries had experienced a dynamic development in all areas: politics, economy, commerce, culture, education, etc.

"Trade relations between Moldova and France are steadily increasing: in January-June, 2018, the volume of exports to France has increased by 1.7 times compared to the same period of the previous year. During the reference period the imports from France increased by 60%. In Moldova, there are 225 companies with French capital" Igor Dodon said.

Also, the President of Moldova mentioned the rise of the dialogue in the field of culture and education, in which the French Alliance played a leading role. "The programs promoted by this organization offer Moldovan students the opportunity to study in France. At the same time, the Moldovan diaspora in France plays an important role in the dialogue between our countries,” the head of state added.

Regarding the foreign policy of Moldova, the President Igor Dodon emphasized in particular that our country tended to develop balanced and mutually beneficial relations with both Western and Eastern partners. At the same time, Igor Dodon said we would maintain and consolidate the constitutional principle of permanent neutrality of Moldova.

In this context, the President of Moldova discussed with the President of France the perspectives of settling the Transnistrian conflict. In particular, the Moldovan side proposed to the French side to participate more actively in consultations on this issue with Germany, Russia and other foreign actors, participants of the officially recognized 5 + 2 format.

"I believe that the involvement of Paris, including within the framework of the European Union's policy, will give a new impetus to the regulatory process, which will eventually contribute to identifying an effective solution that will mark the first peaceful and diplomatic success of the last decades in resolution of the “frozen” conflicts in the post-soviet space and in general in the OSCE space,” the President of Moldova said.

At the end of the meeting, Igor Dodon expressed gratitude to the President of France for the invitation to attend the Peace Forum, to be held in Paris this November.