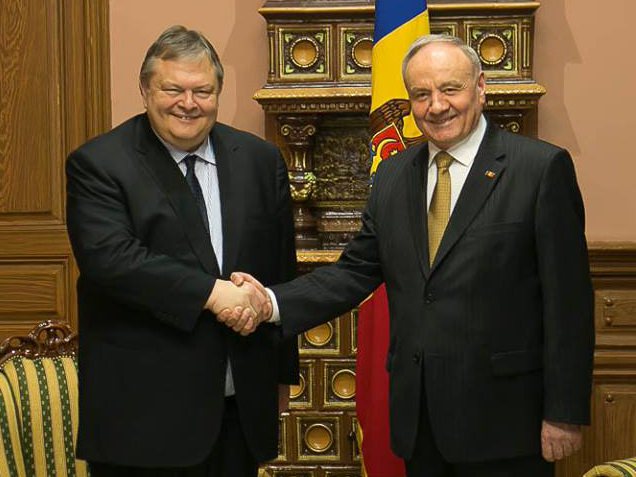 The president welcomed the Greek official’s visit to Moldova, in the context of Greece holding the European Union Presidency starting from 1 January. Nicolae Timofti expressed belief that, despite external pressures that aimed at diverting Moldova from its European agenda, Moldova would sign the Association Agreement with the European Union in 2014.

President expressed gratitude for the support of Greece in outrunning the procedure of signing the Association Agreement with the EU, likely to be signed in next June.

Greek Foreign Minister Evangelos Venizelos said he wanted to send a strong message of support for Moldova's European aspirations from the Greek authorities. "We are happy that, during the Greek EU presidency mandate, the visa regime for Moldovan citizens willing to travel to Europe was abolished", said the Greek diplomat.

Evangelos Venizelos stressed the importance of reforming the justice sector and creating an attractive investment climate for foreign business people. "These reforms would contribute to the development of trade between our countries, with Greek business people willing to invest in Moldova's economy," said Greek Foreign Minister.

Nicolae Timofti and Evangelos Venizelos tackled other topics of bilateral cooperation, as well as the situation in the region.