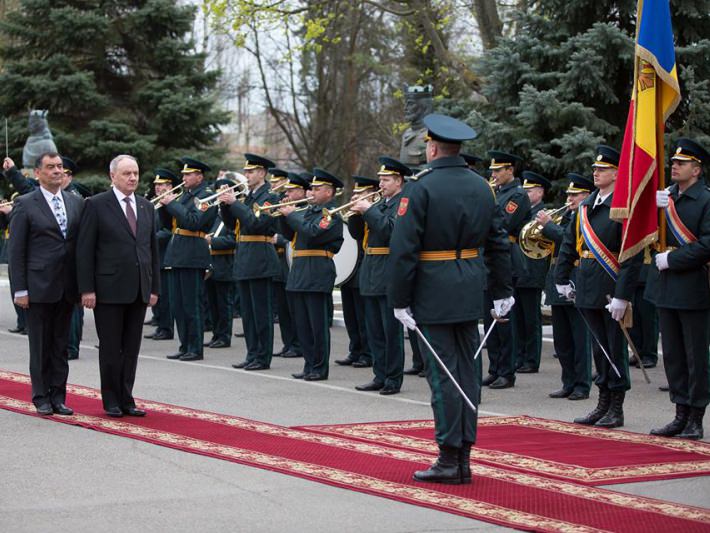 Subsequently, Timofti introduced Troenco to the ministry’s officers and staff.

Timofti said „The new leader of the Defence Ministry, Mr. Valeriu Troenco, is a devoted patriot of the nation, knight of the Stefan cel Mare Order, who proved courage and manhood when fighting for the state’s freedom and sovereignty. The qualities he has, as well as the vast experience got in different posts will represent, in my opinion, the strong point in the work not easy at all to manage the Defence Ministry”.

Timofti was confident that the ministry’s new leadership would manage to boost up the National Army’s development and ensure the mobilisation of the entire staff, in order to reform the military system.

In the context of the complex regional situation, Timofti underlined the importance of a military structure able to ensure Moldova’s defence.

„The work of the leadership of the Defence Ministry and National Army must focus on providing sufficient capacities to defend the national territory, maintain the military order and discipline, and ensure the integrity of armament and military patrimony, as well as the social protection of the staff”.

Timofti added that the Defence Ministry’s new leadership must start its activity by making a fair assessment of the National Army and institutional management.

„The army must become a modern and credible force, endowed with up-to-date and modern equipment, and trained in line with modern standards,” Timofti said.