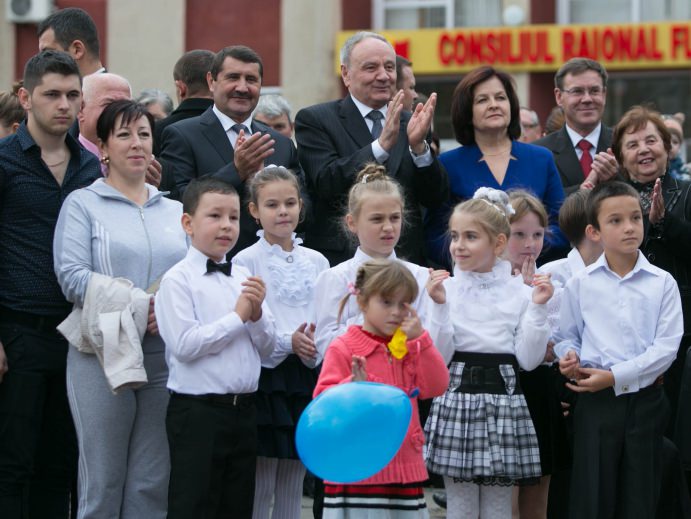 President of the Republic of Moldova Nicolae Timofti participated today, 14 October current year, in the events dedicated to the Floresti City’s Day, marking its 425 anniversary since the first documentary attestation.

In his speech delivered to a large audience, Nicolae Timofti said that he was honoured to be together with his townsmen at the Floresti City’s Day, as he was born in the Ciutulesti village, Floresti district.

President of the Republic of Moldova reminded that in the 17th century the Floresti village was part of the estate of the famous chronicler Miron Costin, who wrote “Letopisetul Tarii Moldovei” (The Chronicles of the land of Moldova). „The historical actions of our ancestors have to mobilise us and give us strength to face the times that we live in today. We have to build up such a future that our greatest voivodes and scholars to be proud of”, the Head of State said.

In another train of thoughts, Nicolae Timofti stressed that the Republic of Moldova has committed to the European integration and its modernisation was possible by carrying out extensive reforms, which would ensure the wellbeing of its citizens. “We can achieve this goal by building up a rule of law state, where nobody would be beyond the law, with an independent judicial system and people would benefit from all constitutional rights. We carry out these reforms in the interest of citizens, for a better future for our children”, the Head of State said.

President Nicolae Timofti voiced hope that the city’s residents would preserve and perpetuate the beautiful popular traditions and would contribute, through their energy, hard work and spirit of initiative, to the prosperity of the Republic of Moldova.

Nicolae Timofti also attended the festive concert held in the central square of the town and discussed with the participants in the event.