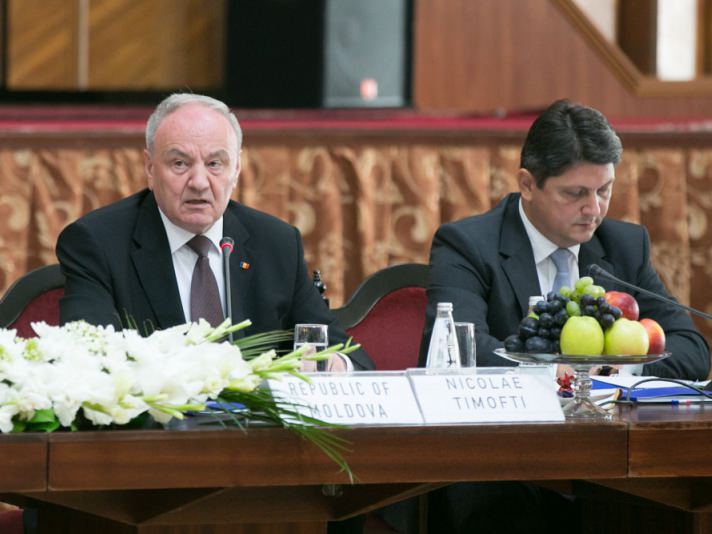 President Nicolae Timofti participated in the ninth meeting of the European Action Group for Moldova at the Palace of the Republic today.

Nicolae Timofti delivered a speech, in which he appreciated the support provided by the western partners for carrying out Moldova’s European integration and maintaining it on the list of foreign policy priorities at the EU level.

Timofti said the signing of the Association Agreement with the European Union had already brought benefits to the Moldovan citizens, who have been travelling visa free to Europe for a few months. At the same time, starting from 1 September 2014, when the temporary enforcement of the Moldova-European Association Agreement starts, economic agents will be able to export agricultural products to EU on easier terms.

Timofti voiced hope that the juridical procedures of the EU member states, necessary for the ratification of the Association Agreement, would be carried out as fast as possible.

„I share the attention you give to the fulfilment of commitments taken by Moldova as regards the consolidation of the state based on rule of law. The justice and fighting corruption reform are among my concerns as well. The ensuring of the observance of all standards related to the organisation of the parliamentary polls, due to take place on 30 November 2014, are also in my focus. I hope and I am confident that the result of these elections will strengthen more Moldova’s pro-European orientation, which I share and promote while exercising my mandate,” Timofti said.

Timofti also referred to the worrying evolutions in the regional security, which highlighted the importance of using every mechanism, in order to ensure Moldova’s stability and security. Nicolae Timofti welcomed the European Union’s support for implementing the security reform.

„We are the eyewitnesses of deep geopolitical changes on Europe’s map. Twenty three years after the Soviet Union’s disintegration, we may see how dramatic the effects, triggered by the implementation of the rights any independent state must usually enjoy, may be,” Timofti said.

In the context, Nicolae Timofti reiterated Moldova’s position, which firmly and unconditionally backed the territorial integrity of the neighbouring and friendly state, Ukraine.

„We deeply regret the losses of human lives and speak out for stopping any kind of interferences from outside the country with the war, in which the governmental forces fight against the separatists supported from the east. We are firmly confident that only the Ukrainian nation has the right to decide on its form of the state structure, which this country will have in the long run. The state organisation of a country is something domestic,” Timofti stressed.

In conclusion, Timofti voiced confidence that the signing and implementation of the Association Agreement with the European Union would contribute to consolidating Moldova’s independence, thus ensuring its citizens with a European future.

The European Action Group for Moldova is an informal ministerial mechanism launched in January 2010, at an initiative by Romania and France, in order to promote Moldova’s interests and visibility on the European agenda.