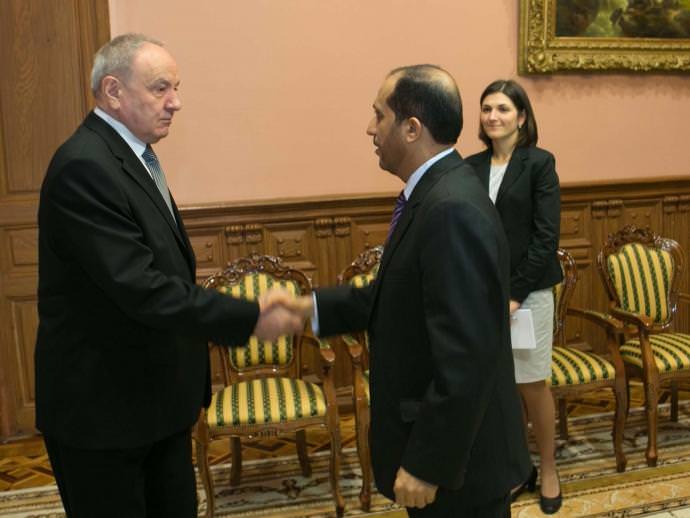 President of the Republic of Moldova Nicolae Timofti met today, 25 September, current year, the Bucharest-based Ambassador of the United Arab Emirates (UAE) to Moldova Yacoub Yousef Al Hosani, on the occasion of the end of his mission.

The head of state thanked the envoy for his contribution to the development of the relations between Moldova and the United Arab Emirates, voicing confidence that there are opportunities to expand the bilateral cooperation. “Opening of the Moldovan Embassy in Qatar offers new prospects for fostering the economic ties between our countries, as well as with other states from South-Western Asia,” Timofti said.

The president stated during the meeting that the Moldovan authorities are willing to attract investments of UAE companies into the national economy, especially in the roads’ infrastructure modernisation projects.

For his part, ambassador Yacoub Yousef Al Hosani said that the signing of the agreement on mutual promotion and protection of investments and of the Convention on avoiding double taxation and fiscal evasion prevention on the VAT and property would boost up the economic cooperation between the Republic of Moldova and the United Arab Emirates.

Yacoub Yousef Al Hosani welcomed the launch of a new regular air flight by the Fly Dubai Company between the capitals of the two states. „As many as 17,000 Moldovan tourists visited the United Arab Emirates in 2012 and, once this airline was launched, the passenger flow will increase significantly”, the official said.

Nicolae Timofti and Yacoub Yousef Al Hosani agreed that the Moldovan and the Emirates authorities to initiate talks on extending the mutual cooperation.