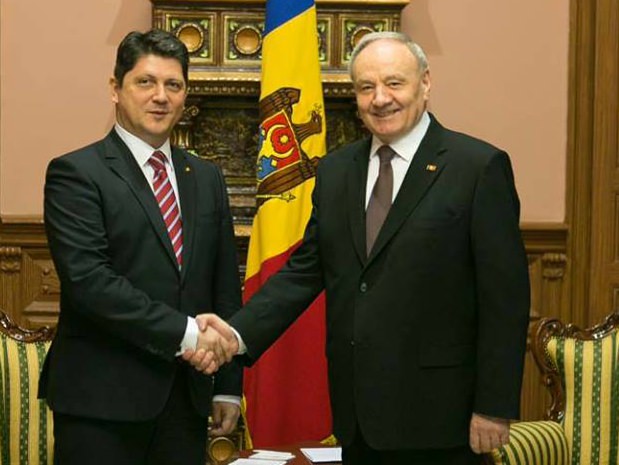 Timofti thanked the official for the substantial material and logistic assistance provided by the Romanian authorities for Moldova’s European integration. “Your visit represents a gesture of solidarity on behalf of Romania towards Moldova, in the context of the difficult regional situation”, he said.

“The Transnistrian conflict can be settled only by peaceful means, via observing the sovereignty and territorial integrity of the country. The law on the special status of the region within Moldova offers the people from the left bank of Dniester a guaranteed level of self-government in different sectors of public life,” Timofti noted.

Corlatean expressed support for the integrity, sovereignty and territorial unity of Moldova. He pointed out that the evolution of the situation in Crimea presented a danger to security in this region of Europe.

Titus Corlatean said his current visit was occasioned by the participation in the second meeting of the Moldova-Romania intergovernmental commission for European integration. The officials are to sign more bilateral cooperation agreements. He reiterated the Romanian authorities’ commitment to provide the needed support to successfully implement joint projects in such sectors as: energy, infrastructure and education development.

“Moldova’s efforts to join the EU values and standards will be crowned with the signing of the Association Agreement with EU as soon as possible, and the Moldovans will be able to travel without visas to Europe”, the Romanian foreign minister said.

Titus Corlatean noted that the Moldovan authorities must hold an awareness campaign on advantages the citizens would benefit from after the signing of the Association Agreement with the EU. “This is necessary in order to counteract the manipulation and disinformation campaign launched by the forces that are hostile to Moldova’s European future,” Corlatean added.