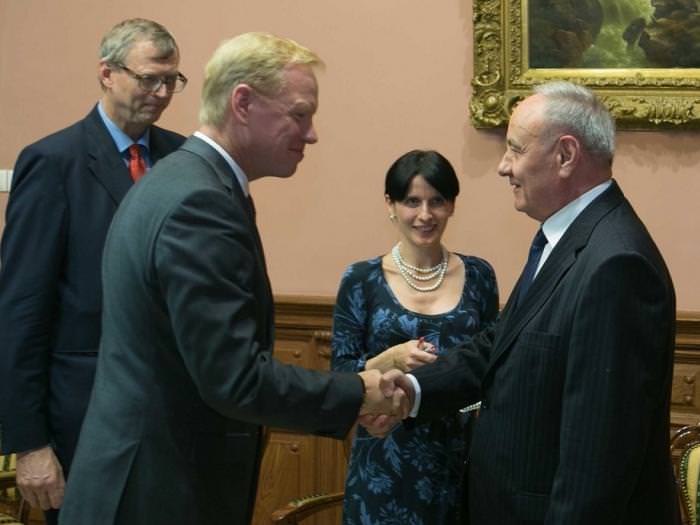 President Nicolae Timofti had today, 17 September current year, a meeting with the head of the German Committee on Eastern European Economic Relations Rainer Lindner, an association representing the interests of more than 180 companies from the Federal Republic of Germany.

The head of state stressed the importance of the Moldova-Germany relation from the perspective of the European integration policy promoted by the Moldovan authorities. “The visit to Chisinau by German Chancellor Angela Merkel in 2012 contributed to the deepening of the Moldovan-German ties”, President Nicolae Timofti said.

Referring to the embargo on the Moldovan wines, imposed by Russia, Nicolae Timofti appreciated the support Moldova enjoyed on behalf of the European Parliament. “Despite the economic sanctions, Moldova will observe the commitments assumed within the Eastern Partnership, with a view to initialling the Association Agreement and Free Trade Agreement with the EU at the Vilnius Summit”, Nicolae Timofti said.

The head of the German Committee on Eastern European Economic Relations Rainer Lindner spoke out for the boosting of the economic relationships between Moldova and Germany. He underlined that the initialling by the Republic of Moldova of the Association Agreement and Free Trade Agreement with the European Union would bring only benefits to the society in all the sectors. “The European Union’s market represents an opportunity for businesspeople from Moldova. By participating in specialised fairs in Germany, the wine-makers have the chance to promote the Moldovan wines”, Rainer Lindner said.

The head of the German Committee on Eastern European Economic Relations said the association he represents backed the visa liberalisation for the citizens of Moldova and Ukraine. “The European Union will thus become more attractive for Moldova’s citizens, including those from the left bank of Dniester,” Rainer Lindner added.