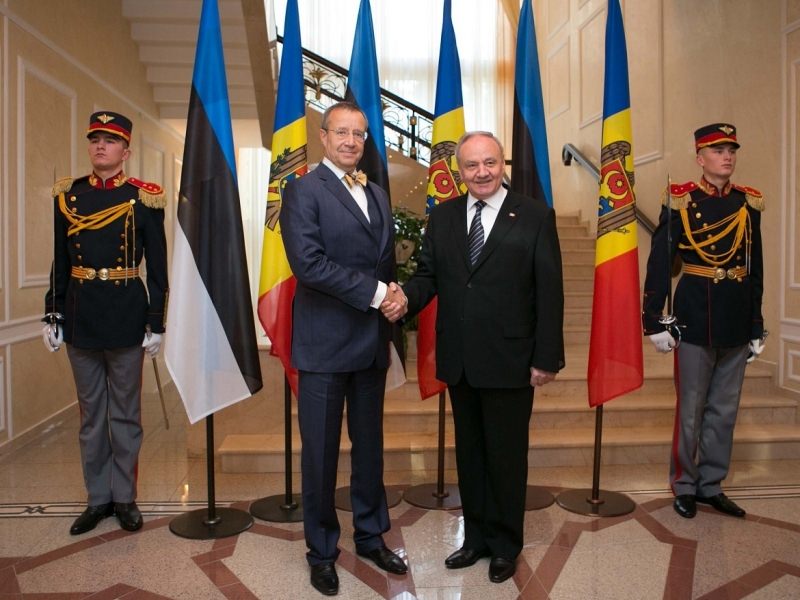 President Nicolae Timofti had today, 4 October current year, a meeting with the Estonian President Toomas Hendrik Ilves, who is on a visit to our country.

The two officials had a tête-à-tête meeting, and afterwards engaged in talks with the participation of the two delegations’ members.

Timofti welcomed the presence of Toomas Hendrik Ilves in Chisinau, stressing that this visit represented a gesture of solidarity on Estonia’s behalf in an extremely important period for Moldova’s European future. “The Moldovan authorities are carrying out a far-reaching project on Moldova’s modernisation. The successful implementation of the reforms gives us hope for initialling the Association Agreement and Free Trade Agreement at the Vilnius Summit. President Ilves has backed and pled, from the highest rostrums, Moldova’s case, for which I am very grateful to him. Also, the consultancy services offered by the Estonian experts in the areas of health, education, social protection, observance of human rights and e-governance are very precious in the process of aligning to the European standards”, the head of state said.

For his part, president Toomas Hendrik Ilves said that the progress made by the Moldovan authorities within the Eastern Partnership programme had given clear prospects for the Republic of Moldova’s accession to the European Union. “Estonia unconditionally backs Moldova’s European integration aspirations. The initialling of the Association Agreement with the EU will provide new opportunities for Moldova’s modernisation. We also plead for the liberalisation of the visa regime with the EU for Moldovans”, Toomas Hendrik Ilves said. (video: http://www.youtube.com/watch?v=dcqisyZPh0c)

During the press conference, when asked by journalists about Russia’s opposition towards the accession of the former Soviet Union states to the EU, the President of the Republic of Moldova said that, “despite the reluctance of inner and outer political forces to limit citizens’ right to a democratic and civilised life, the Moldovan authorities will not give up on the European aspirations”. Nicolae Timofti highlighted the European partners’ support for the consolidation of political, economic and energy security of Moldova.

Toomas Hendrik Ilves stated that Estonia had passed through a similar period and Russia’s economic pressures led only to an improvement of the Estonian products’ competitiveness and diversification of exports’ destinations. (video: http://www.youtube.com/watch?v=M-2v2NRN-DM&feature=youtu.be)

President of Estonia said that the justice reform and fight against corruption continued to be decisive in the process of Moldova’s accession to the European Union.

“The edification of a state based on the rule of law takes time. Estonia’s experience shows that the change for the better of the Moldovan justice may be accomplished by taking over the European practices in jurisprudence”, Toomas Hendrik Ilves stated. (video: http://www.youtube.com/watch?v=9NsAx_qYDrM&feature=youtu.be)