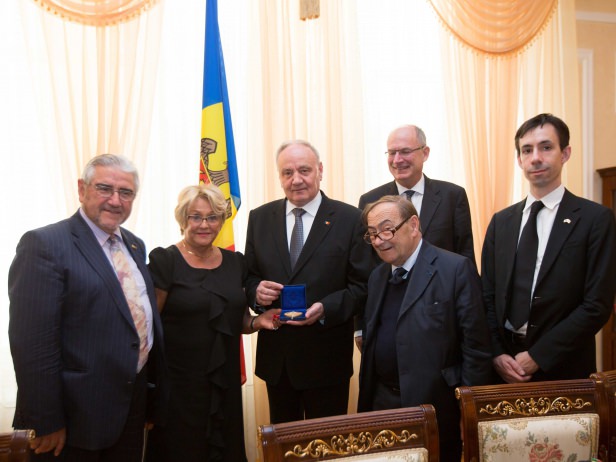 The head of the friendship group, Josette Durrieu, handed over Nicolae Timofti the Golden Medal of the French Senate.

Timofti thanked the French authorities for backing Moldova’s European aspirations and also voiced wish that the French MPs speed up the ratification of the Moldova-European Union Association Agreement.

Nicolae Timofti described the friendship ties between Moldova and France as excellent, underlining that the two states shared both the democratic values and Francophone ones.

Senator Josette Durrieu welcomed the democratic evolutions in Moldova and stressed that the process of Moldova’s monitoring y the Council of Europe should be ceased following the parliamentary polls due this autumn.

„The European integration demarche of Moldova is a natural one, as Moldova has European vocation. I hope that the results of the parliamentary elections due on 30 November 2014, which we want to be free and democratic, will confirm this historic option,” Josette Durrieu said.

Durrieu said the Association Agreement between Moldova and the European Union would be ratified by late 2014.

„France pays special attention to the relation with Moldova. Under a report worked out for President François Hollande, Moldova is the most francophone country in Central and Eastern Europe. This represents an important element, in order to foster the bilateral cooperation ties in all sectors,” Durrieu said.

Senator Patrice Gélard underlined the importance to reform the democratic institutions, so that the rule of law could work efficiently. Senator Jean-Claude Frécon referred to advantages of implementation of the European Charter of Local Self-Government.

The sides also exchanged views about the situation in Ukraine.