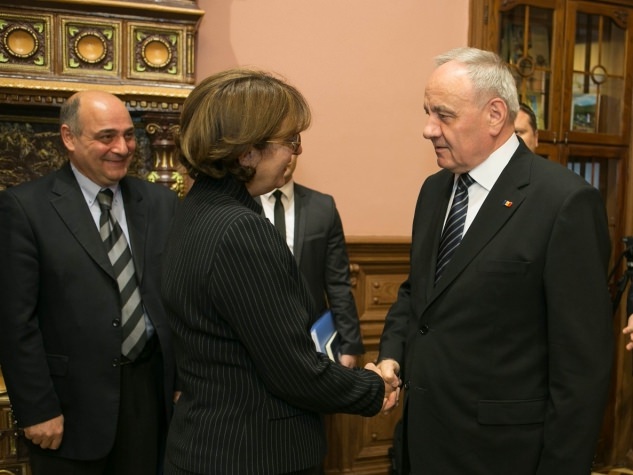 President of the Republic of Moldova Nicolae Timofti had today, 4 October current year, at the Presidential Residence, a meeting with the Georgian Minister of Foreign Affairs Maia Panjikidze.

The Head of state expressed his hope that the friendly relations between the two countries and the Western partners’ gestures of solidarity would facilitate the common course of European integration of the Republic of Moldova & Georgia.

Nicolae Timofti stated that the Republic of Moldova had embarked on the path of modernization. The government is implementing policies that would allow edifying a rule of law state, where human rights and freedoms are observed. The Moldovan president stressed that the optimisation of the administrative structures, judiciary reform and fighting corruption were priorities for the Moldovan authorities.

Georgian Minister of Foreign Affairs Maia Panjikidze said that the Tbilisi government would not give up on the country’s policy of accession to the European Union and the NATO. “Russia’s pressure on the states participating in the Eastern Partnership program compels us to be united in our endeavours. Georgia, just like Moldova, wants to initial the Association Agreement with the EU at the Vilnius Summit. We ascertained that Moldova had hugely advanced on the path of reforms and we are ready to apply your experience in all the areas”, the diplomat said.

During the discussion, Nicolae Timofti and Maia Panjikidze reiterated the interest of both sides to foster bilateral ties.