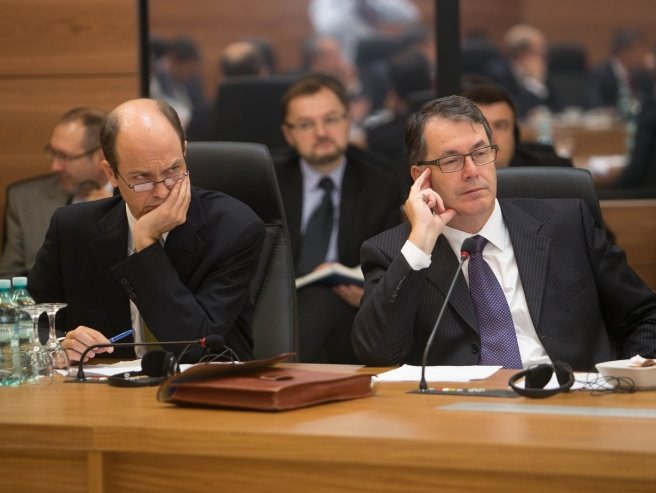 President of the Republic of Moldova Nicolae Timofti met today, 2 October current year, at the Ministry of Foreign Affairs and European Integration, the Ambassadors of the Political and Security Committee of the EU Council (PSC), paying a visit to Chisinau.

The head of state welcomed the presence of European officials in the Republic of Moldova, noting that this visit fits into a string of support actions on behalf of the European Union for Moldova’s European aspirations. “We have received numerous signals of support and encouragement on this period, when domestic and foreign political forces tried to limit the citizens’ right to a European, democratic and civilised life. Our European friends adopted concrete decisions, meant to consolidate Moldova’s political, economic and energy security. I would like to remind only about the European Commission’s intention to liberalise the access of our wine products to the EU market, for which we are extremely grateful”, Nicolae Timofti said.

President Nicolae Timofti reconfirmed the decision of Moldovan authorities to observe the commitments taken within the Eastern Partnership with a view to initialling the Association Agreement and the Free Trade Agreement with the EU at the Vilnius Summit.

“We hope the Association Agreement to be signed in 2014, during the mandate of the current European Commission. Also, we will ensure a sufficient implementation level of the Action Plan on visa liberalisation, which will allow the European Commission recommending the member states to liberalise the visa regime with the European Union – a decision we hope to be taken in 2014”, the head of state said.

President Nicolae Timofti highlighted that the Republic of Moldova was further counting on the support of the EU and the USA in settling the Transnistrian conflict, identifying a political solution and withdrawing the Russian troops and ammunition from the region.

The ambassadors of the Political and Security Committee of the EU Council welcomed the Moldovan authorities’ reforms agenda. “Reformation of justice, fighting corruption and creation of a friendly investment climate are key elements for the reforms’ success”, PCS President Walter Stevens said.

The European officials stated that the Republic of Moldova would further benefit from the EU’s support for its policy to align to the EU standards.

The Political and Security Committee of the EU Council is an important chain in the EU internal decision-taking process in the field of Common Foreign and Security Policy of the EU. The PSC’s key duties comprise monitoring the developments of international situation and preparing a strategic approach of the EU in the international context, including crisis or conflict situations. All the decisions on the EU’s contribution or involvement in the Transnistrian settlement are discussed and approved within the PSC meetings, before they are passed by the EU Council of Ministers.