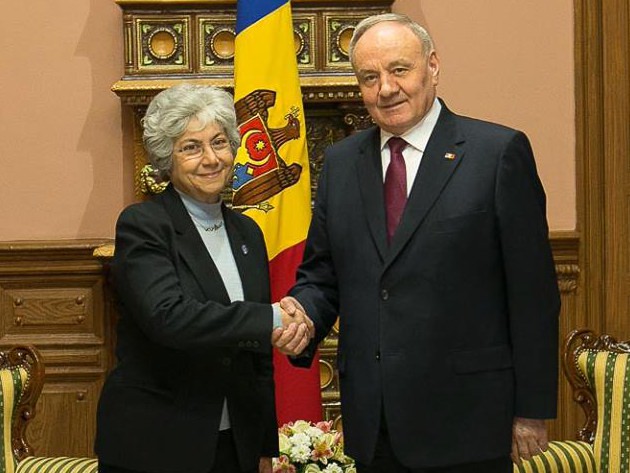 Timofti reconfirmed the Moldovan authorities’ firm attachment to the principles of the rule of law state, where the fundamental human rights were observed, regardless of racial, social or confessional origin. „The implementation of these standards allows us advancing on the European integration path,” Timofti said.

The president underlined that the process of integration into EU created a friendly environment for modernisation and local democratic transformations, including in the human rights sector.

Timofti informed about the adoption and enforcement of the Law on ensuring equal opportunities, launch of the reform on inclusion of persons with disabilities and reformation of the ombudsman institution.

Nicolae Timofti said that the Moldovan authorities’ main concern was the justice system reform, in order to ensure the citizens’ right to a fair justice.

Flavia Pansieri welcomed the progress recorded by Moldova in the human rights observance area. The official said that the steps taken by Moldova to this end would allow developing a modern and prosperous society.

Pansieri underscored the importance to fight corruption, and that the Moldovan parliament ratifies international conventions on the observance of the rights of migrants and their family members.

Nicolae Timofti asked representatives of UN High Commissioner for Human Rights to monitor the situation in the Transnistrian region.

The officials also approached other aspects of cooperation between Moldova and the United Nations Organisation.