President of Moldova considers visit of Turkish leader a historic one 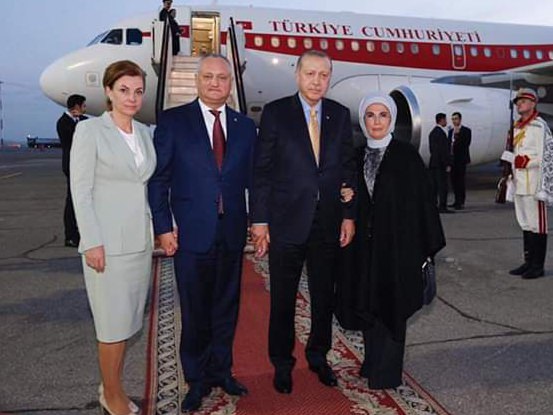 The President of the Republic of Moldova, Igor Dodon, saw his Turkish counterpart Recep Tayyip Erdoğan off, who completed his historic visit to Moldova.

In the two-day visit, the sides signed the Strategic Cooperation Declaration between the two countries, established a Strategic Cooperation Council, inaugurated the renovated headquarters of the Moldovan Presidency and several social objects in Comrat, and signed agreements on future cooperation, etc.

"I am sure that the visit of the President of Turkey to our country can be considered a new stage in the development of cooperation between our states, for the benefit of both peoples," Igor Dodon stressed.

The head of our state also mentioned that President Erdoğan had invited him to the solemn ceremony of inauguration of the third Airport in Istanbul, which would be the largest airport in the world. The event will take place on October 29, when Turkey will mark the 95 years after its foundation by Mustafa Kemal Atatürk.