Nicolae Timofti: „Magistrates with integrity problems should be excluded from the judicial system” 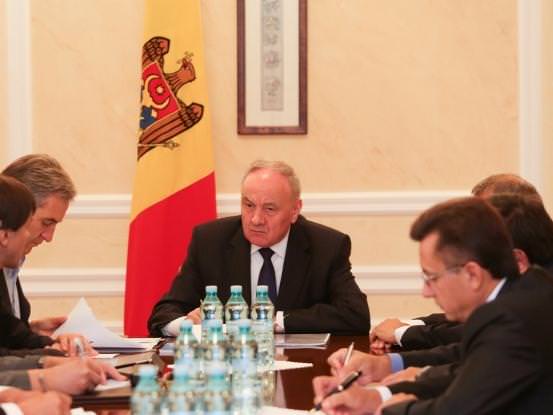 Attending the meeting also were Minister of Justice Oleg Efrim; head of the Superior Council of Magistrates Nichifor Corochii; head of the Supreme Court of Justice Mihai Poalelungi; the chief of the Chisinau Court of Appeal Ion Plesca, as well as the presidential advisors.

The head of state informed about the pressing issues in the judicial system and the measures which must be taken to improve the quality of the act of justice.

President Timofti insisted on the role of the institutions in charge, especially the Superior Council of Magistrates, Supreme Court of Justice and Court of Appeal, in applying the provisions on criminal and disciplinary punishment of magistrates who issued decisions running counter the legislation. According to their powers, the Supreme Court of Justice and Courts of Appeal assess the quality of the act of justice and could ascertain the abusive enforcement by magistrates of the legal norms. The head of state considers that the magistrates with integrity problems should be excluded from the judicial system.

At the same time, Nicolae Timofti underlined the importance that the government and parliament promote and adopt draft laws stipulating the turning more responsible of judges committing abuses and illegal acts, as well as providing proper salaries to judges, meant to ensure the magistrates’ independence. Head of state said that all these processes should be implemented concomitantly, so that the reforms initiated in the sector be efficient.

Timofti draw the attention of the participants in the meeting to the judicial system’s poor communication with society and recommended those in charge to display more openness and understanding towards the media institutions, so that the residents could be informed from the first source and correctly about the processes taking place in the justice sector.

Timofti announced that he would regularly convene meetings on justice issues, so that the courts’ work may be improved considerably as soon as possible.