Nicolae Timofti: „We openly say you that we need a strong participation of the United States in ensuring security in the region” 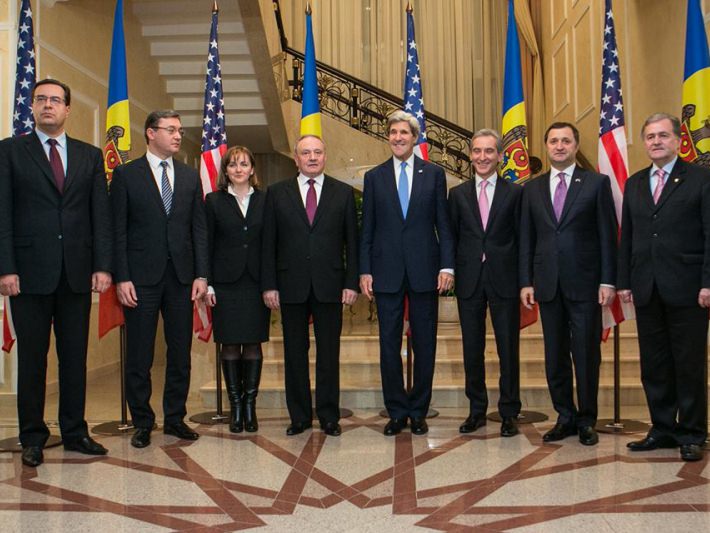 Attending the meeting were also Foreign and European Integration Minister Natalia Gherman, as well as the leaders of the pro-European Coalition: Vlad Filat, Marian Lupu and Ion Hadarca.

The Moldovan officials told the head of the American diplomacy that his visit to Chisinau, which took place several days after Moldova had initialled the Association Agreement with the European Union, had a solid symbolical significance and encouraged the authorities and the citizens to persevere on the path of the democratic transformations.

President Nicolae Timofti thanked John Kerry for the political support and the financial assistance the United States is providing Moldova. “We openly say you that we need a strong participation of the United States in ensuring security in the region,” the head of state stressed.

American Secretary of State John Kerry said the United States fully supported Moldova’s European aspirations and urged the Moldovan authorities to press ahead with the democratic transformations. “We are confident that any country has the right to make its own choice as concerns its development course. The United States is on your side and will continue backing you by providing the assistance you need. We can do many good things together,” the head of the U.S. diplomacy said. The American official noted that the trilateral format – the United States of America, Moldova and the European Union – offered Moldova wide opportunities of economic development and diversification of energy resources.

In his speech, Prime Minister Iurie Leanca made a proposal to set up a Moldovan-American action plan in the sectors of common interest. Iurie Leanca informed John Kerry about the political and economic situation in Moldova and the region and unveiled the Moldovan authorities’ concepts on development as regards the present problems. “We can create a success story here in Moldova, with the support of our American and European partners,” Iurie Leanca stressed. The prime minister punctually referred to what he called domestic challenges: reformation of justice, fighting corruption and improving the business climate. The prime minister also touched upon the efforts taken by the Moldovan authorities to settle the Transnistrian conflict and diversify the energy resources. He emphasised that Moldova praised the USA’s support on these dimensions.

For his part, Parliament Speaker Igor Corman highlighted the intense character of the Moldovan-American inter-parliamentary cooperation. He declared for the development of cooperation between the parliaments of Moldova and the United states, and at the same time, asked for backing to carry out the country’s European integration.

In this context, the speaker thanked for the substantial support provided Moldova by the United States. He also highly appreciated the unanimous adoption by the members of the Committee on Foreign Affairs at the U.S. Congress’ House of Representatives of the Resolution on support of the European aspirations of the peoples of the European Union’s Eastern Partnership countries.

The leader of the Liberal Democratic Party (PLDM), Vlad Filat, highly appreciated the moral and financial support the United States was providing Moldova, as a result of which numerous Moldovan citizens were enjoying quality services in diverse areas. He also said the Moldovans would be able to soon benefit from modern roads and irrigation systems within the Compact programme. Vlad Filat thanked John Kerry for his visit to Chisinau “In 2011, U.S. Vice President Joe Biden strengthened the confidence in our forces, whereas your visit, Mr. Secretary of State, is a strong motivation to advance on the road we embarked on in 2010,” the PLDM leader said.

The leader of the Democratic Party ((PDM), Marian Lupu, assured John Kerry that the Moldovan government would consistently fulfil the domestic and international commitments. “We orient ourselves towards clear-cut and pragmatic solutions for the sectors of cooperation we have with our American, European and Russian partners,” Marian Lupu said.

For his part, the leader of the Liberal Reformists’ Party, Ion Hadarca, also referred to the political situation in Moldova and the country’s European integration efforts. “From the geographic viewpoint, we are in the Central Europe, yet on the outskirts of the European Union. We want you to help us return to Europe from the political point of view as well,” Ion Hadarca said.