Nicolae Timofti had meetings with the president of the Republic of Turkmenistan, Gurbanguly Berdimuhamedow 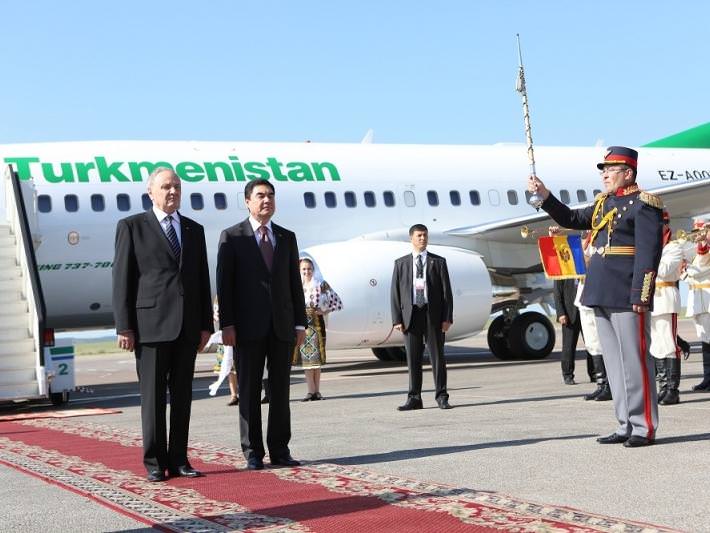 The two heads of state held a face-to-face discussion at the Presidential Residence. Then they had had at the State Residence enlarged-format formal discussions with the participation of the members of the two delegations.

During discussions, Nicolae Timofti has expressed his belief that the first visit of the president of Turkmenistan in the Republic of Moldova will contribute to revive relations between the two countries. „The relations between our countries will enhance due to Your visit. We have identified various areas of activity in which we can collaborate”, said Nicolae Timofti to his Turkmen counterpart.

The two officials noted that both sides are interested in boosting bilateral economic cooperation aimed at development of energy and agroindustrial sectors. In this regard, Nicolae Timofti and Gurbanguly Berdimuhamedow agreed to resume the activity of the Moldo-Turkmen Intergovernmental Commission for Economic Cooperation.

It was agreed to organize Days of Moldovan culture in Turkmenistan and Days of Turkmen culture in the Republic of Moldova in the next two years.

Gurbanguly Berdimuhamedow thanked Nicolae Timofti for the international support provided by the Republic of Moldova to Turkmenistan.

„Turkmenistan has very large reserves of energy resources and is willing to diversify its way of transportation. We are grateful to the Republic of Moldova for the support provided within the UN, where we try to promote a resolution to streamline this goal”, Gurbanguly Berdimuhamedow declared. The President of Turkmenistan has highlighted the importance of collaboration between the two states in fighting terrorism, drug trafficking and organised crime.

The head of Turkmen state also declared that the Republic of Turkmenistan was interested in Moldova’s experience as regards producing and processing agricultural products, developing entrepreneurship and invited Moldovan businessmen to make investments in his country.

The Turkmen official invited Nicolae Timofti to pay an official visit to Ashgabat. The invitation was accepted.

By the end of discussions, the two heads of state have signed a Moldovan-Turkmen joint statement, and the representatives of the Moldovan and Turkmen Governments signed intergovernmental agreements in trade, tax system, diplomacy and culture sectors.