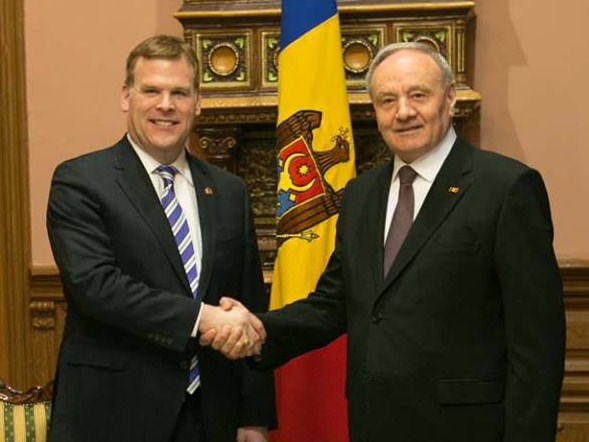 Timofti welcomed the visit to Chisinau by the high-ranking official and thanked for the financial assistance Canada has provided for reforming democratic institutions of Moldova.

“Moldova pays a special importance to bilateral relations, given that many of our fellow citizens have immigrated to Canada. This is confirmed by the opening of the Moldovan Embassy in Ottawa in 2013,” Timofti said.

Timofti voiced concern about the climate of insecurity persisting as a result of the latest evolutions in Crimea. He said the recent actions by the unconstitutional authorities from the Transnistrian region caused tension and were aimed at blocking Moldova’s European integration.

Baird conveyed a message of solidarity with Moldovan people in the current difficult regional context. He underlined the Canadian authorities’ concern about instability triggered in the Black Sea region by Russia’s actions, meant to cause new tensions al regional level.

“Canada backs the independence, sovereignty and territorial integrity of Moldova. Canada, as part of the G7 group of most industrialised countries of the world, condemned the annexation of Crimea by Russia. External pressures are inadmissible in relations between states”, Baird noted.

The Canadian official highlighted the achievements recorded by the Moldovan authorities in carrying out the democratic reforms and edifying a state based on the rule of law, in order to sign the Association Agreement with the EU in the near future.