Igor Dodon had a meeting with Moldovan diaspora in Saint Petersburg 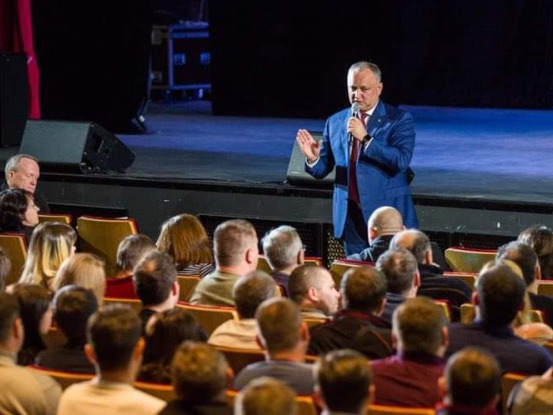 During his working visit to the Russian Federation, the President of the Republic of Moldova Igor Dodon had a meeting with the representatives of the Moldovan diaspora in Saint Petersburg.

The head of state mentioned that the discussion had been in a warm and friendly atmosphere, during which many direct questions in the economic, cultural and electoral field had been asked.

Just like at the meeting with the diaspora in Moscow, Igor Dodon reported on the results of his agreements with Vladimir Putin regarding the amnesty of Moldovan citizens who had broken the Federal Law "On the departure from the territory of the Russian Federation and entry into the territory of the Russian Federation", Article 26, paragraphs 4 and 8, and Article 27, paragraphs 12, 13 and 14.

At the same time, the President of the country spoke about the initiative he had launched last year on the transition to the mixed electoral system that provided mandates for representatives of the diaspora. In this context, it was highlighted the necessity of opening a larger number of polling stations on the territory of the Russian Federation, where more than half a million Moldovans lived and worked.

Igor Dodon mentioned that our fellow countrymen had welcomed the fact that as of January 1, 2019, Russia would cancel the import duties on Moldovan fruit, vegetables, canned food and wine production. According to them, Moldovan products are demanded and expected in Russia.

"We also welcomed the agreement with the Russian President to increase the number of scholarships for Moldovan students wishing to continue their studies at Russian higher education institutions," the head of state said.

The president also said that our fellow citizens considered such meetings useful as they offered them the opportunity to consult the head of state directly on the problems they were facing. Thus, Igor Dodon stressed that the dialogue and consolidation of the Moldovan diaspora from all corners of the world would continue.