Igor Dodon had a working meeting with Russian Government delegation 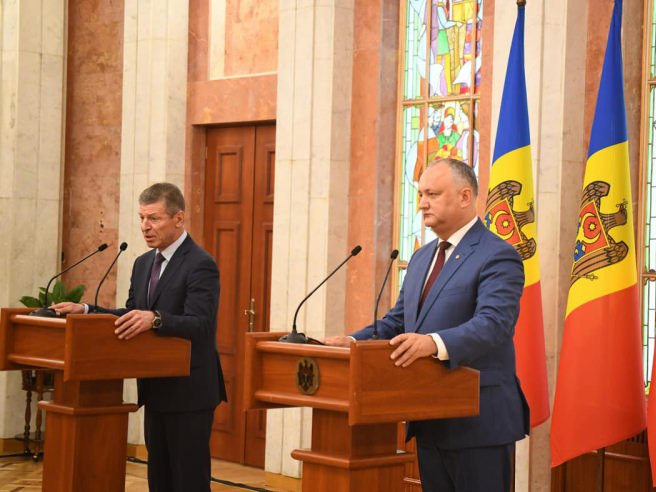 President of the Republic of Moldova had a working meeting with special representative of the Russian Federation’s President for the Trade Development and Economic relations with Moldova, Deputy Prime Minister Dmitrii Kozak, Russian Minister of Agriculture, co-chair of the Moldovan-Russian Intergovernmental Commission, Dmitrii Patrushev and Deputy Minister of Foreign Affairs of Russia, George Karasin.

After wider talks, Igor Dodon and Mr. Kozak held a briefing in which they announced that Deputy Prime Minister for Reintegration Vasile Shova was appointed today as co-chair of the bilateral Intergovernmental Commission of our country. As well, the Head of State specified that the first meeting between Mr. Shova and Mr. Patrushev is planned for today.

President expressed belief that this appointment will have a key role in resuming full activity of the Moldovan-Russian Intergovernmental Commission, which has not met since November, 2016. “There were many issues on the bilateral agenda that required the urgent involvement of the Government of the Republic of Moldova, which was impossible in the case of the former government”, said Igor Dodon.

As well, the Head of State said he had addressed the Russian leadership with the request to extend the agreement on the tax-free export to the Russian market for five categories of Moldovan goods.

Igor Dodon noted that an agreement in this regards was obtained at his request during a meeting with Russian President Vladimir Putin in Autumn, 2018. “This agreement involves the tax cancellation for some categories of products in period of January the 1st – July the 1st, 2019. This significantly increased the volume of Moldovan agroindustrial exports to Russia and allowed local economic agents to save hundreds of millions of lei”, the Moldovan President said.

During the discussion, the Head of State came to the Russian side to solve the problem of transit of truck transport with Moldovan goods on the territory of Ukraine. Officials examined the possibility of expending the list of Moldovan enterprises in area of canned products and wine-making, which could be exported to Russia. Igor Dodon said that this issue will certainly be included in the agenda of the Intergovernmental Commission.

Finally, during the meeting with the Russian partners, the President stressed the need to start negotiations on natural gas deliveries to the Republic of Moldova. We reiterate that this is a separate agreement on Ukraine transit and the gas tariff for our country.