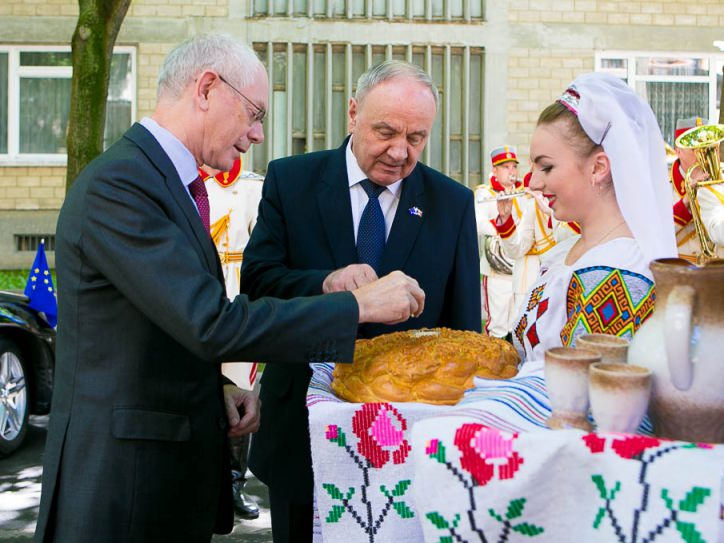 The two officials exchanged opinions on ways to enhance cooperation relations between Moldova and the European Union, as well as the situation in the region.

The president thanked Mr. Herman Van Rompuy for his personal contribution to the process of Moldova’s accession to the European Union.

President Nicolae Timofti reaffirmed Moldova’s strong commitment to the Western partners, to continue the reforms to adjust to the European values and standards.

Nicolae Timofti welcomed the abolition of visas for Moldovan citizens and expressed confidence that the signing of the Association Agreement with the EU would be a decisive step towards Moldova’s European integration.

European Council President Herman Van Rompuy said he was impressed by the progress made by the Chisinau-based authorities to modernise Moldova. "The remarkable successes achieved in a very short time places Moldova ahead other Eastern Partnership countries," said the European official.

Herman Van Rompuy stressed the importance the government must pay to strengthening democratic institutions, the judiciary reform and fighting corruption.

The European official said the politicians must explain to the citizens the benefits of Moldova signing the Association Agreement with the EU.

"We are witnessing a disinformation campaign against the EU, triggered by the opponents of the Eastern Partnership countries’ European choice. I don’t see, however, how they could make a comparison between the European option and another. The European Union gives Moldova access to a market of 500 million consumers with high purchasing power. EU's gross domestic product is 10 times higher than the one of the states talking about creating a Eurasian Union, "said Herman van Rompuy.