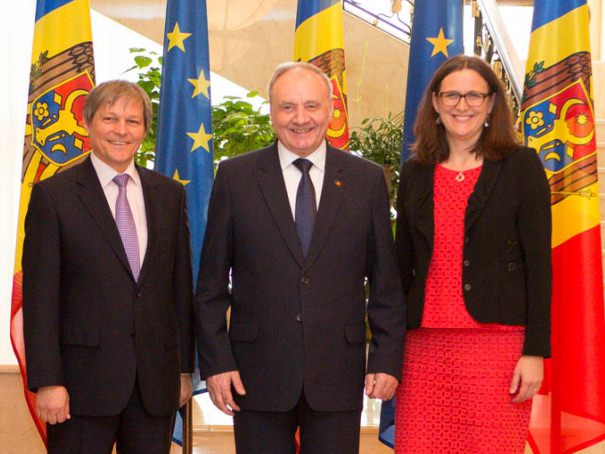 Timofti informed the European officials about the reforms implemented by the Moldovan authorities to fulfil the commitments towards the Western partners within the Eastern Partnership.

“The signing of the Association Agreement with the EU on 27 June 2014 provides a chance for a better living to all citizens of the country”, Timofti said.

Cecilia Malmstrom welcomed the cancellation of the visa regime for Moldovans, noting that this decision marked the achievements made so far in the country’s modernisation process. “The consolidation of democratic institutions, justice reform and fight against corruption must be priority subjects on the Moldovan government’s agenda from now on,” the official said.

Dacian Cioloş said the Free Trade Agreement provided substantial development opportunities to Moldovan business people, especially, to farmers. “The European Commission will propose doubling quotas for Moldovan agricultural products on European market. Thus, 400,000 tons of apples, 2,000 tons of tomatoes, 10,000 tons of plums and grapes could be exported. It is about an amount equivalent to agricultural production Moldova is currently selling on other markets”, he said.

The European Commissioner assured that the EU would back the Moldovan farmers, so that the agricultural goods should be processed and marketed in line with the EU standards. In 2014-2020, the EU will earmark 120 million euros for modernising agriculture and rural development programmes in Moldova. “The first instalment worth 64 million euros will be allotted in July. The farmers will understand that they are going to only benefit from the signing of the Association Agreement with the EU”, he said.