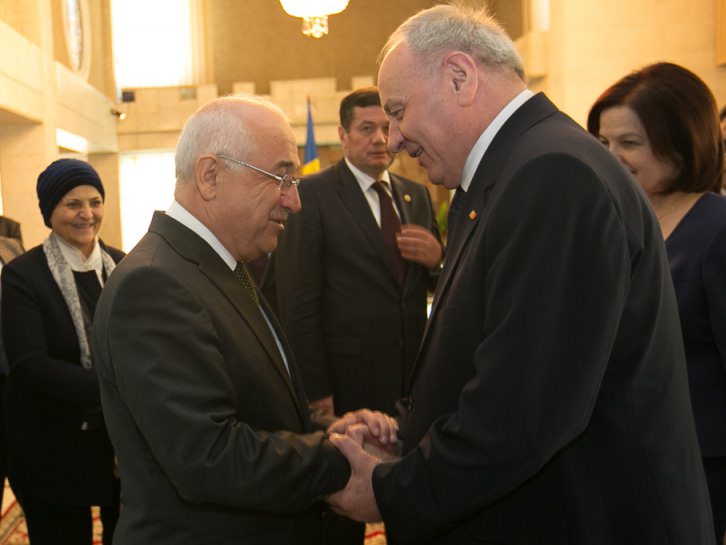 President Nicolae Timofti today met with President of the Grand National Assembly of Turkey Cemil Cicek, on an official visit to Moldova.

The president welcomed a Turkish parliament speaker’s visit for the first time ever in Chisinau. Nicolae Timofti expressed satisfaction with the current level of the Moldovan-Turkish relations, calling for the intensification of bilateral cooperation in all areas.

The two officials discussed the European integration process, in which both countries are involved.

Turkish Parliament Speaker Cemil Cicek welcomed the progress made by the authorities in implementing reforms on aligning Moldova to EU standards.

Cemil Cicek said that Turkey supported Moldova's European agenda and that all Moldovan citizens, including those from the Autonomous Territorial Unit of Gagauzia (Gagauz Yeri) would benefit from the signing of the Association Agreement with the EU.

The parliament speaker expressed the Turkish authorities’ interest to contribute, in concert with the Moldovan government, to Gagauzia’s development. "The Comrat-based leaders will collaborate with the central authorities in Chisinau for the benefit of the Gagauz people," said the Turkish official.

The sides reviewed the consequences of the worsening of the security situation in the Black Sea region as a result of the events in Ukraine. Parliament Speaker Cemil Cicek said that Moldova needed to intensify cooperation with North Atlantic Treaty Organisation (NATO) to strengthen national security.