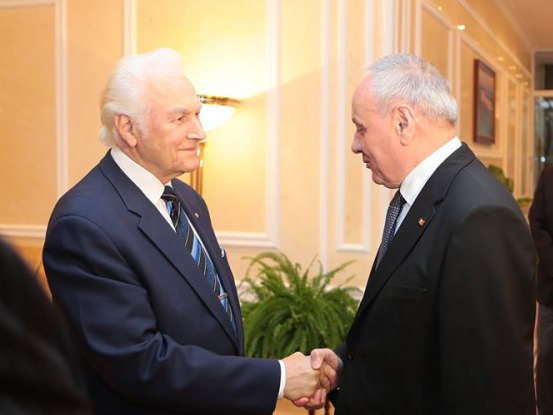 The former president of Estonia, Arnold Rüütel, in office in 2001-2006, has sent a message of support for Moldova’s European aspirations, after a visit paid to Moldova on 10-13 November, following an invitation by President Nicolae Timofti, the presidential press service has reported.

In Chisinau, Arnold Rüütel met the head of state, as well as the former Moldovan presidents Mircea Snegur, Petru Lucinschi and Vladimir Voronin. The former high Estonian official gave interviews with the Moldovan media and visited the Gagauzian autonomous territorial unit, where discussed Estonia’s European integration experience with the local authorities and students of the Comrat-based State University.

Arnold Rüütel is the last Chairman of the Estonian SSR's Presidium of the Supreme Soviet and one of the restorers of Estonian independence. In his tenure of President of Estonia from 2001-2006, he supported his country’s accession to the European Union. Estonia became an EU member during his mandate in 2004.

We present here the full text of the message by Arnold Rüütel to the people of Moldova:

“I believe in Moldova.”

I left Chisinau in the mid-November sunshine aboard an Air Moldova flight. In the inflight magazine's interview a senior official of an international organisation answered the question of how he views Moldova's prospects for success. A potentially active transport hub, a well-educated population, a developed industry, some of the most fertile fields in Europe – said the official, and added: “But unfortunately Moldova’s growth and development is stunted by lack of resolution of the Transnistrian conflict. Failure to resolve the conflict mires Moldovans in poverty and insecurity.”

I do not agree. Such a judgement renders Moldova as a state, and its people hostages to the Transnistrian conflict. This is dishonest and fails to correspond to the truth. Acceptance of such an attitude would mean giving up and remaining stuck in the past.

Yet this is exactly what we would like to avoid. In politics, just as in economic or trade relations, getting stuck in the past chains us to that past and limits our future.

I can repeat what I said at a meeting with professors and students at Comrat's modern university: Europe connects Estonia and Moldova; the heart and soul, the past and future of the Estonian, Moldovan and Gagauz people lies in Europe.

I emphasise here the word future. There is no questioning that among the European Union's Eastern Partnership countries Moldova is a land of good news. This is demonstrated by the rekindled interest of EU investors towards Moldova. This is proved by your economic indices. And it is confirmed by Moldova's determination to control its territory and the decision to locate six mobile migration checkpoints on the internal administrative border in the Dniester area. I hope and believe that next year it will be possible to conclude visa freedom between Moldova and the EU in the same way as it is realistic to finalise the association as well as the free trade agreement this year in Vilnius. The European Union trusts Moldova.

Moldova's success depends first and foremost on Moldova itself – on the people who live here. Friends and allies can give advice and work together with you. This is the contribution of friends and allies, but no-one can do your job for you.

In Moldova I met all four of your presidents, three of whom I already knew personally. Among them was Vladimir Voronin who in 2005 came to Estonia on a state visit and to whom I paid a return visit a year later in Chisinau. It was President Voronin who in Tallinn told me that European integration is one of Moldova's foreign policy priorities, a natural choice for your country because due to your origins, history and intellectual values Moldova belongs to the European civilisation, and only in this way is the flourishing of the Moldovan people possible.

At the time, such words were yet another confirmation that if Moldova wished, Estonia could share its experience in the field of European integration. Today, eight years later, tens of co-operation projects unite our two countries and people. But Estonia's and Moldova's common road into the future is complex, it requires a lot of effort as well as time.

Estonia concluded its association agreement with the European Union in 1995; we became a European Union member state only in 2004. Was it difficult? Yes, it was. But we have nothing to regret. The Estonian economy and agriculture are more competitive than before, our education lives up to international standards, our e-state and IT-solutions create interest in many countries – from Tunisia to the USA.

The continuation and persistence of Estonia – both as a state and people – is more certain than ever before.

Thus, I am convinced that an important key to the solution of the Transnistrian conflict is a democratic, economically successful and politically stable Moldova that continues to approach the European Union. This is an example that will sooner or later become contagious and force Transnistria to give up its dead-end policy of isolation.

The European Union, which during the course of a couple of decades has become one of the strongest associations in the world, is a sign of confidence to its member states and allies, it means being part of a market of five hundred million people that will  become many times more powerful after the conclusion of a free trade agreement between the EU and the USA.

However, Moldova's European integration does not mean opposition to or the seeking of confrontation with anyone. It means that Moldova uses its right and obligation as a sovereign state to decide its own future. That Moldova chooses the best allies and does so independently, without outside pressure or threats from large states.

For me, Moldova's choice is simple: a successful and democratic Europe, one in which small and big are equal. It is a choice worthy of the 21st century.

I believe in Moldova.