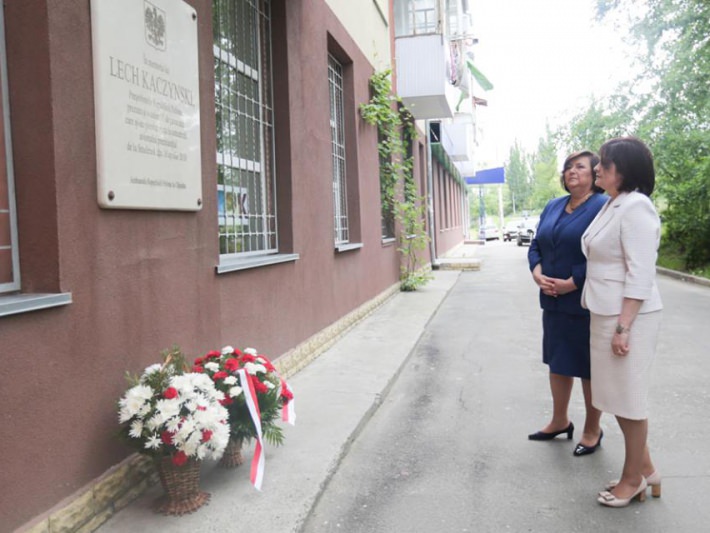 Polish and Moldovan First Ladies Anna Komorowska and Margareta Timofti, respectively, participated in the opening of the 14th issue of the Polish Spring in Moldova Festival today. The event was organised by the Polish Diaspora, with the support of the embassy of Poland in Chisinau, the presidential press service has reported.

The festival was held at the Ginta Latina Theatre and attended by artistic bands of the Polish community from northern Moldova, southern autonomous region Gagauzia and Transnistrian region, as well as from Chisinau.

Anna Komorowska welcomed the participants in the event, stressing that such cultural actions contributed to developing the friendship ties between the two nations.

For her part, Margareta Timofti said the festival enriched Moldova’s cultural landscape, providing a good occasion to take knowledge of the activity of the Polish Diaspora.

Also today, the two ladies laid flowers at the Lech Kaczynski commemorative plaque on the facade of the Chisinau-based Adam Mickiewicz Polish Library, located on the street named after the dear departed Polish president, dead in the Smolensk airplane accident.

On Friday, the ladies held a meeting at the presidential residence. They discussed the consolidation of the Moldovan-Polish partnership, by implementing economic, cultural, educational and social projects.

Anna Komorowska and Margareta Timofti visited the Chisinau-based Nikolai Gogol Theoretical Lyceum, where 150 pupils attend the classes, within which subjects are taught in Polish. The pupils presented the guests a varied artistic show, which included songs in Romanian, Polish and Russian languages.

„I am happy to find out that pupils learn the Polish language in Chisinau. The Polish government annually provides scholarships to young people willing to study at Polish universities. I urge you to take advantage of this opportunity,” Komorowska said.

The two ladies attended the inauguration of the Rheumatology Section of the Chisinau-based Mother and Child Institute, restored and re-equipped with the financial assistance of the Polish government. The head of the above-mentioned institution, Stefan Gatcan, informed Anna Komorowska about other five projects, worth 150,000 euros, financed by the Polish side, as well as about experience exchange programme between the Moldovan and Polish doctors. „Twenty Moldovan specialists will leave soon for probations at the Mother and Child Institute from the Polish city of Lodz,” Gatcan said.

Timofti thanked the Warsaw authorities for the financial and logistical assistance provided to Moldova during the modernisation process of the country. „The solidarity showed by our western partners offers wellbeing to our citizens,” Timofti said.

On Friday evening, Anna Komorowska and Margareta Timofti attended the screening of a movie by Polish director Andrzej Wajda, namely „Walesa. Man of Hope”, within the European Film Festival, at the Gaudeamus movie theatre.

The movie presents the story of an electrician from Gdansk, Lech Walesa, future laureate to Nobel Prize for Peace and Polish President, who while leading the Solidarnosc Trade Union, fought for elimination of the Communist totalitarian regime and establishment of democracy in Poland.

Current Polish President Bronislaw Komorowski, involved in the activity of the Solidarnosc Trade Union, was arrested after the martial law was decreed by the Communist authorities in 1981. Anna Komorowska was one of the first people who came to the detention centre from Jaworje, in order to back her husband.

Anna Komorowska pays a three-day visit to Moldova, at an invitation by Margareta Timofti.