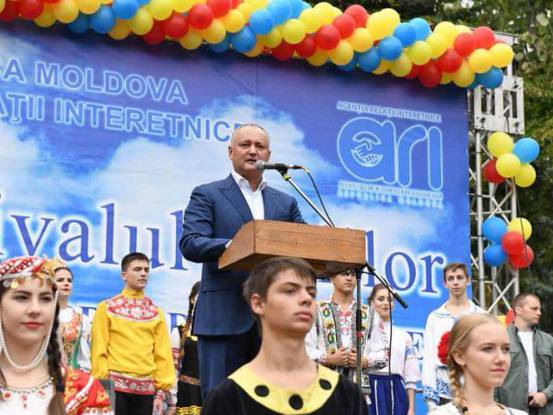 The President of the Republic of Moldova, Igor Dodon, participated in the 17th edition of the Republican Ethnic Festival. The head of state welcomed the participants of the Festival, which is traditionally held in September and unites representatives of dozens of ethnicities in our country.

Igor Dodon has mentioned that the Republic of Moldova is a common home for all peoples who live here, and that we have nothing to divide. "I think we must do our best to keep Moldova forever for our children and grandchildren," the head of state stressed.

At the same time, the President reiterated the importance of keeping Russian as an interethnic language, given that one-third of the country's population speaks Russian.

Additionally, Igor Dodon informed the participants and guests of the Festival that, basing on numerous requests from representatives of the ethnic and cultural associations, he took the decision to appoint an adviser in the given domain. Thus, within a few weeks, the head of state is about to sign a decree in this respect.