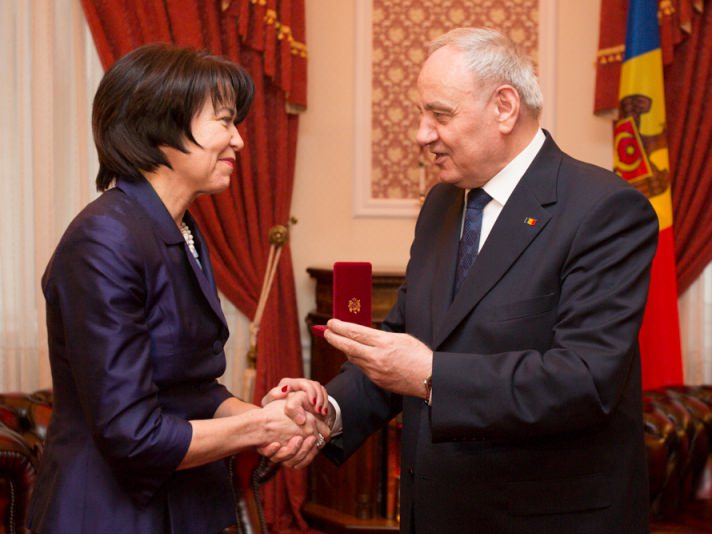 President Nicolae Timofti today met UN Resident Coordinator and Permanent Representative of the United Nations Development Programme (UNDP) in Moldova Nicola Harrington-Buhay, upon the completion of her mission in Moldova.

The president thanked Mrs. Nicola Harrington-Buhay for her personal contribution to the successful implementation of many social projects in Moldova under UN auspices. The projects contributed to substantial improvement of the living standards of Moldovan citizens.

As a token of deep gratitude for backing the reforms in Moldova, for merits in implementing projects in rural areas and contributing to the promotion of Moldova's image on the international stage, President Nicolae Timofti awarded the Civic Merit medal to Mrs. Nicola Harrington-Buhay.

The president said the programmes carried out in Moldova by specialised UN agencies had helped implement justice and education reforms, combat poverty and migration, protect human rights. Nicolae Timofti noted, in particular, the population and housing census taken this year, as well as building the capacities of the Central Election Commission and other public central administration institutions.

For her part, Nicola Harrington-Buhay expressed satisfaction with the fact that UN activities in Moldova had yielded results.

The UN official praised the Moldovan authorities’ progress in strengthening the rule of law state. Nicola Harrington-Buhay said that, under the Partnership Framework between the United Nations and Moldova for the period 2013-2017, the sides would take actions to strengthen institutional capacities for sustainable development.