President of Moldova had working meeting with governor of St. Petersburg 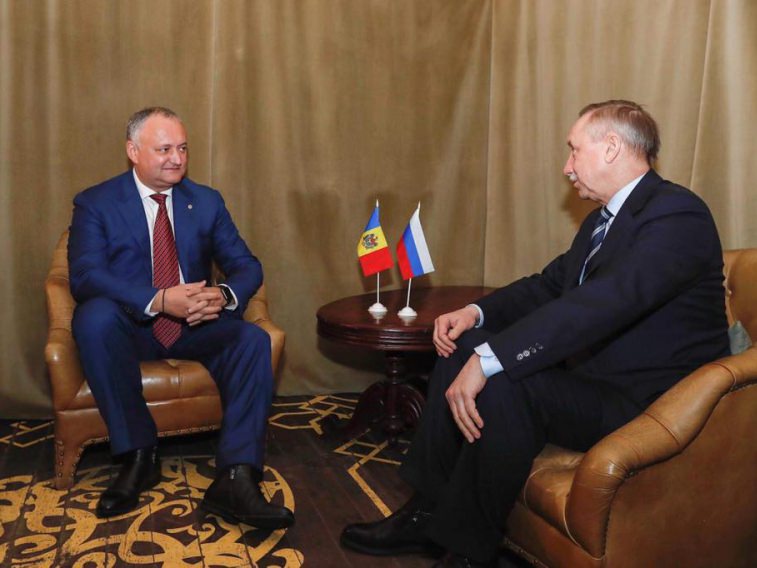 President of the Republic of Moldova Igor Dodon held a working meeting with the governor of St. Petersburg, Alexander Beglov.

The parties discussed a number of important issues of bilateral economic, humanitarian, interregional cooperation, as well as the problems faced by labor migrants from Moldova who work in St. Petersburg and Leningrad region. In this context, Igor Dodon and Alexander Beglov welcomed the agreements reached between the Presidents of Russia and Moldova during the official visit of the Moldovan leader to the Russian Federation.

During the meeting, the head of state noted the interest of the Moldovan side in the speediest restoration of full bilateral trade and economic ties. Igor Dodon and Alexander Beglov expressed a general confidence that the first Moldo-Russian economic forum, which took place on September 20-22, 2018 in Chisinau, would become a serious platform for the further development of business relations between Moldova and Russia, including at the regional level.

In the context, the interlocutors discussed the results of the Moscow-Russian economic council meeting held recently in Moscow, where experts from both countries analyzed the achievement of the investment agreements concluded and measures to further strengthen cooperation in priority areas such as agriculture, industry, tourism, attracting foreign direct investment. The Head of State stressed the interest of the Moldovan side in active participation of business circles of St. Petersburg in the implementation of joint projects.

Also, the parties talked about increasing the number of scholarships for young people from Moldova to study at universities in St. Petersburg.

Alexander Beglov accepted the invitation of Igor Dodon to visit Moldova in March 2019.

“Cooperation with the northern capital of Russia, our main strategic partner, will always be one of the most important priorities for the Republic of Moldova”, Igor Dodon concluded.