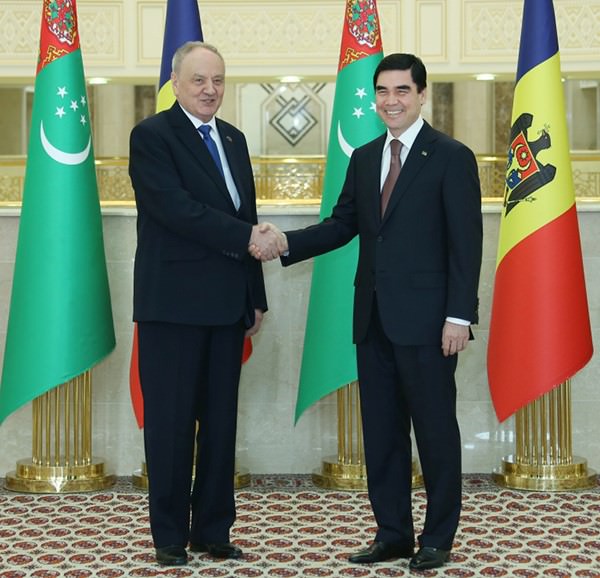 President Nicolae Timofti concluded his visit to Turkmenistan on 12 December. He participated in an international conference on neutrality policy: international cooperation for peace, security and development.

Timofti gave a speech, in which he tackled Moldova’s stance on the concept of neutrality.

The speech is following:

First of all, let me express deep gratitude to Mr. President Berdimuhamedow for the invitation to participate in this important event.

This high-level meeting, focused on the current concerns of our states, makes possible deepening the relations in the name of peace and good understanding between nations.

I would like to convey you, dear Mr. President, the warmest congratulations, along with sincere wishes for the people of this beautiful country, on the 20th anniversary of the neutrality status, of special significance in Turkmenistan’s history.

The international community, by adopting a UN special resolution within the General Assembly session on 12 December 1995, recognized this status.

Moldova is part of neutral states group too. By proclaiming the neutrality status in the Constitution 21 years ago, we decided not to be part of military alliances and international organizations and to refrain from other similar actions.

Yet, the neutrality, in my opinion, should not be regarded as a dogmatic, static and restrictive concept. This status does not exclude participation in peacekeeping actions, non-allowing the use of force to solve conflicts.

Since 2003, Moldova has been involved in peacekeeping missions under the UN aegis in a string of countries, among which Liberia, South Sudan and Ivory Coast.

Starting from 2014, Moldovan servicemen are part of KFOR mission in Kosovo. Aligning with EU common policy on security and defence, we have been participating in settling crisis in Mali and the Central African Republic.

We believe that it is our duty to be not only a beneficiary, but also provider of security.

Facing various armed challenges, including terrorist attacks, which have intensified worldwide in the last years and resulted in numerous victims, the solution is obviously joining efforts and actions of all states that speak out for restoring peace and tranquility.

Moreover, in the context of the tragic events in eastern Ukraine, we can talk about the need to elaborate a strategy for the entire region, able to meet the political, economic and security challenges.

In Moldova, we are concerned about the situation in the breakaway Transnistrian region. We want to identify a comprehensive political solution to this conflict, that should observe the territorial integrity of Moldova.

In the context, I want to thank all participants in this international forum for tireless support of sovereignty, independence and territorial integrity of Moldova.

We had to ascertain that our status of neutrality has not been and is not observed by Russia, which keeps its military troops in the Transnistrian region, although this country committed to withdraw the military troops and ammunition stocks in at the OSCE meeting in Istanbul 1999.

I reiterate Moldova’s stance on the need to complete the withdrawal of Russian military troops and ammunitions from the territory of our country. Also, we opt for turning the peacekeeping operation from the security zone in a civil one with international mandate.

As a result of Russia’s refusal to withdraw military troops, Moldovan political forces notified the provisions on neutrality, stipulated in the Article No 11 of the Supreme Law, at the Constitutional Court.

The experience of neutral states varies from one country to another, yet they have a common sense: promotion of peace and stability.

Moldova has developed solid relations with international and regional organizations (UN, OSCE and Council of Europe) over the years, set cooperation ties with NATO member states, meant to combat threats and to strengthen national security and defence capacities.

We try to use the neutrality concept in a way allowing counteracting the risks and threats to national security.

The principle of neutrality is not applicable in relation to criminal organizations, extremism, terrorism and infringements of international law.

All countries, including neutral ones, must be united and make common front against terrorist actions encroaching upon the most important values of the mankind.

At the end, I would like to thank once again the event’s host for hospitality and excellent organization of the conference.

Also, I wish all the best to you, the participants in this forum.

Thank you for attention!”