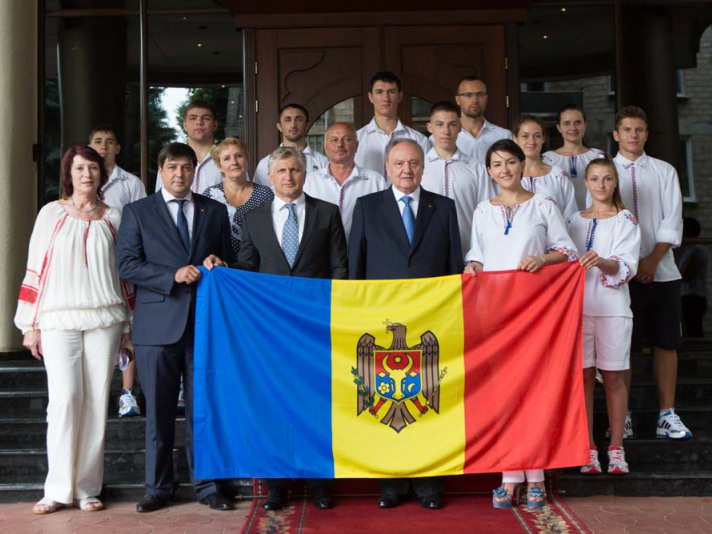 President Nicolae Timofti today handed the state flag to sportswoman Tatiana Doncila, who is to be standard bearer at a ceremony on the opening of the Youth Olympic Games.

Timofti wished success to representatives of Youth Olympic national team and expressed confidence that the Moldovan sportspeople would defend with dignity the country’s colours at the international competition.

“The example of our Olympic champions Nicolae Juravschi and Tudor Casapu proves us that the effort and rigour are always rewarded by results. I wish you to get outstanding performances in your activity, so that the flag should be hoisted as often as possible, and the national anthem should sound at stadiums around the world,” Timofti said.

The chairman of the National Olympic Committee, Nicolae Juravschi, said the expectations were high, as Moldova had a lot of gifted young athletes, who had already won medals at world and European championships.

Sportswoman Tatiana Doncila, who won a bronze medal at the European championship, and will represent Moldova in women’s wrestling, voiced confidence that the fair-play spirit would prevail at the competition.

The 11 members of the national team will participate in six sport events within the Youth Olympic Games, due in Nanjing, China, on 16-28 August.

The Youth Olympic Games, meant for young people aged between 14-18 years, are organised according to the same formula as the traditional Olympic Games, with summer and winter events alternating every two years. Thus, the first issue of the summer Youth Olympic Games took place in Singapore in 2010, and the winter one in Innsbruck, Austria, in 2012.