John McCain: „Moldova may count on the Unites States’ support” 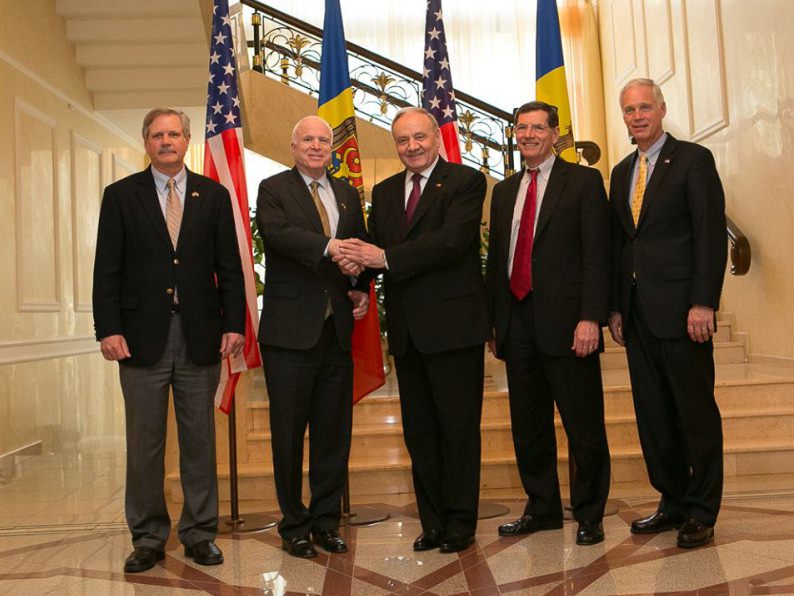 The president welcomed the American lawmakers’ presence in Chisinau, emphasising that the development of the Moldovan-U.S. strategic dialogue represented a priority for the foreign policy of Moldova. Nicolae Timofti reiterated the Moldovan authorities’ firm attachment to the values of a free and democratic society.

President Timofti expressed concern about the insecure situation in the region established due to the developments in Ukraine.

The president referred to the situation in the eastern districts of Moldova: "The five-plus-two negotiations on the Transnistrian conflict settlement proved ineffective. I think it is appropriate to examine possibility of changing this mechanism, in order to optimise the talks," said Nicolae Timofti.

Republican Senator John McCain said the United States would take the needed actions to ensure the sovereignty and territorial integrity of Moldova, as well as the citizens’ freedoms.

"Moldova may count on the Unites States’ support. The U.S. Senate will pass laws to diversify and foster the aid given to Moldova to strengthen democratic institutions, promote press freedom and improve living standards," said John McCain.

John McCain welcomed Moldova’s European aspirations, stressing that each state had the sovereign right to decide on its future.

Senator Ron Johnson encouraged the actions of the Chisinau-based authorities, in order to ensure Moldova’s energy security. “U.S. will provide liquefied gas to the states of the region to reduce their dependence on energy suppliers from the East", said Senator John Barrasso.

At the end of the meeting, President Nicolae Timofti expressed satisfaction with the American partners’ full understanding on all topics of interest for Moldova.