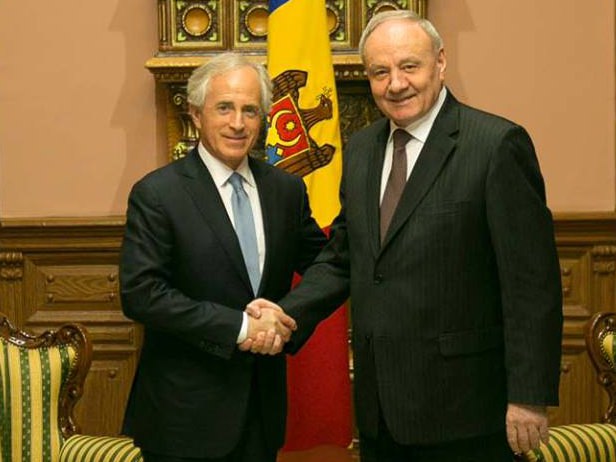 Timofti underlined the importance to develop the Moldovan-American strategic dialogue, launched during Prime Minister Iurue Leanca’s recent visit to Washington. Timofti said that Moldova praised the privileged ties held with the United State of America and European Union at present, which would contribute to consolidating the democratic institutions and building up a prosperous and stable society in Moldova.

„During the talks with more American officials, who have visited us over the past months, we notice an important compliance of ideas and visions with many current topics,” Timofti said.

Timofti added that the increased American presence, under different aspects, in Moldova bolstered the citizens’ confidence into the chances of modernisation of Moldova.

For his part, Robert Corker said that the recent visits of some American high-ranking officials proved the importance of the Moldovan-American ties. „The United States is firmly engaged to promote democracy in Moldova. We will help our friends and partners in the region,” Corker said.

Coker underscored that the USA’s interest in the region, to which Moldova is part, was not a short-term reaction towards the recent events in Ukraine, but a change of attitude of the American politics towards Eastern Europe.

The officials also approached the Transnistrian conflict, Moldovan media, economic cooperation, including the energy one, and joint interest issues.