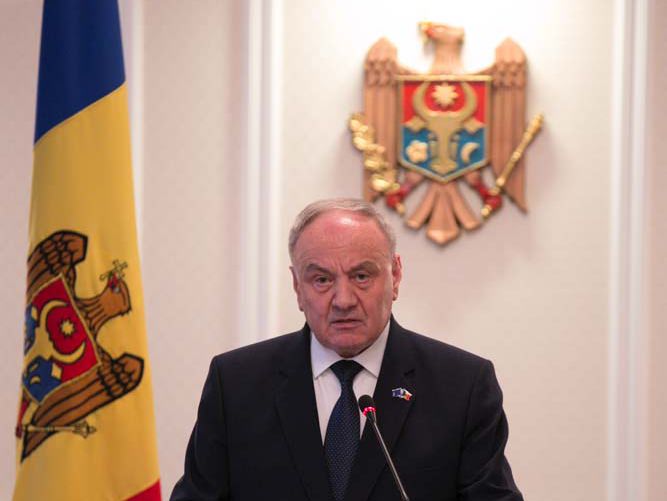 President Nicolae Timofti made a press statement on signing of the Moldova-European Union Association Agreement today.

The message reads as follows:

The Association Agreement with the European Union has been so far the sense of my activity as president. This is an absolute priority of the present government too.

We talk about the political and economic association with the most important union of states after the World War II. The European Union has been created over the past decades, according to the classic principles of democracy, as a modern alternative to the past empires, to which we belonged too.

The essential difference between empires and present order in Europe is that the man and his wellbeing is the focus in the European Union.

For us, the rapprochement to the European Union means more jobs, higher salaries and pensions, as well as the guarantee of observance of human rights and freedoms.

Our chance to make the decisive step towards the civilised world is linked to this construction of states, which has fully proved its usefulness and efficiency, despite the political and financial crisis that it got through.

Many of us travelled to the European Union and, for two months, we have travelled for free there. We could see on our own what life and development conditions are in societies, which assessed correctly and consequently their path.

I refer first of all to ex Soviet and Socialist states, closer to us from historic viewpoint, among which Romania, the Baltic States, Poland and Bulgaria. Moldova is on the same path on which these states and others from the European Union went on. I am happy that we managed to maintain on this line, despite the obstacles put from outside and inside. Despite non-synchronizations and drawbacks we have in Moldova in various sectors, from the justice to the educational one.

The unity of all our citizens, in the name of a better life, in the name of social justice and better stable future for our children and grandchildren counted and will further count.

I want to congratulate everybody from the bottom of my heart for that you believed and worked for that the 27 June event to happen. Workers, teachers, farmers, public servants, servicemen, journalists, diplomats, politicians and others – all together did our best to reach the signing of the Association Agreement with the European Union.

As you know, the Association Agreement also includes, besides the political component, the creation of the Deep and Comprehensive Free Trade Area with the European Union.

At present, the European Union is the main destination of our exports and the Free Trade Agreement will make the Moldovan products more competent. The local producers will have access to a huge market of 500 million consumers with great purchase power, with condition to observe the European quality standards.

New investments and business environment improvement will come up, and immediately after the signing of the document, the European Union will open its market for a range of Moldovan products, such as: vegetables and fruit.

I would like to underline that Moldova’s European choice does not mean hostility towards our partners from the Commonwealth of Independent States, including Russia. I believe that these countries, with which we have traditional cooperation ties, will have only to gain together with a stronger and more prosperous Moldova.

After consulting the leaders of the coalition parties and the parliament’s and government’s leadership, I took the decision to empower Prime Minister Iurie Leanca to sign on Moldova’s behalf the Association Agreement with the European Union. I also signed a decree in this respect.

I consider this is correct and beneficent for Moldova.

A period as important as the one so far is coming up. I am confident that the parliament will ratify the Association Agreement with the European Union soon, as well as the parliaments of the member states.

The state’s institutions and all involved people will immediately start implementing the provisions of the Association Agreement.

The achieving of the next goal of Moldova’s foreign policy – getting a clear prospect to join the European Union – also depends on our subsequent performance.