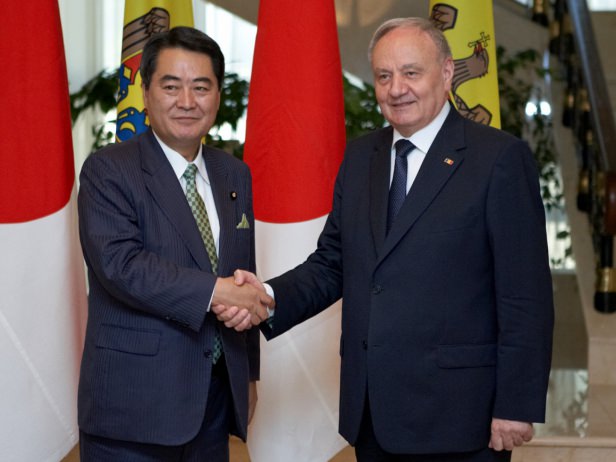 Timofti thanked Takao Makino for the support provided by the Japanese authorities for Moldova’s modernisation. The head of state appreciated the activity of the Japanese International Cooperation Agency (JICA), which was carrying out more assistance programmes in the agricultural sector. Timofti emphasised the grants provided by Japan for humanitarian security, due to which the Moldovan hospitals were renovated and equipped with modern devices.

Timofti opted for taking over Japan’s experience in implementing the programmes on Moldova’s modernisation.

Takao Makino welcomed the achievements recorded by Moldova after proclamation of independence in edifying a democratic society, based on the market economy.

The Japanese official said that, during the tour he paid to the GUAM states (Moldova, Ukraine, Georgia and Azerbaijan), he wanted to identify new opportunities of bilateral cooperation.

“The Japanese government will further provide Moldova with technical and financial assistance, in order to ensure sustainable development and maintain a climate of stability in the region”, he said.

Makino noted that his country would implement new projects on modernisation in the health care, agri-food and energy sectors. At the same time, the programme on providing credits for small and middle enterprises will be continued.

The sides exchanged opinions on the complex regional situation and agreed on boosting the bilateral ties.